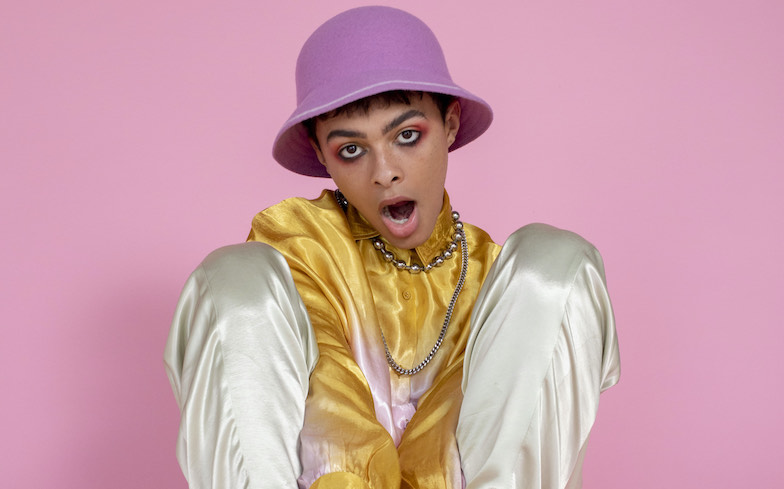 Isaac Dunbar is taking the world of ‘Stan Twitter’ by storm.

Thanks to his infectious pop anthems about the queer teen experience and laidback approach to social media, Isaac Dunbar has garnered quite the online following. ‘Stan Twitter’ often hail the 17-year-old as a “king!” and ask if he’ll adopt them as his child, or if they can send him their cat in the post. Very normal behaviour, yes, but he’s taking it all in his stride.

“My fans are like my besties,” he tells us ahead of the release of his second EP, Isaac’s Insects, which also happens to be the ‘Monsters’ and ‘Beyhive’-esque name he’s assigned to his loyal supporters. “Their love saved me a couple of months ago.”

Although he exudes confidence in his videos and his lyrics often tackle political issues from gender norms, societal expectations, suicide and homophobia, it’s taken a long time for Isaac to be embrace his LGBTQ identity.

Here, we chat with Isaac about his incredible new EP (out 10 April), the impact Lady Gaga’s activism had on him as a young queer kid and how the support from his passionate fanbase saved him during his “personal transformation”.

Hi Isaac! How is self-isolation treating you?
I was going insane at one point, but I’m starting to finally collect myself a little bit. I took a walk yesterday which is very refreshing.

Your new single Commes Des Garcons (Like The Boys) is such a bop. The song is about defying gender norms and societal expectations – have you always been this headstrong?
Never, actually. Not until this year. For a long time I was very insecure with anything having to do with sexuality. It took until this year to even get the strength to identify as gay, so it took a long time.

What has the response to the song been like?
Everybody likes it, even people who aren’t relating to the song. It’s a song that people can just lose themselves to, which is really cool.

One of your previous singles, Makeup Drawer, reflected on the homophobia you dealt with at a young age – was this a difficult song for you to release?
It honestly was. A lot of family members and kids at school, I was not ready for them to hear it. Honestly, I’m glad I put it out because there’s no better time for me to be myself. I’m at a point in my life where I’m almost an adult, I guess, and I realised that it’s okay for me to be myself. For a long time, I didn’t feel that way due to how I was raised, and my environment. It was definitely hard to release, but at the same time I’m glad I did it.

And how did those close to you respond?
[Laughs] Some of them reacted negatively, which I was already ready for so I didn’t really care that much. But a majority of them were actually very supportive and got excited. All my close friends always knew, but now the whole world does.

What was the catalyst in you living a more authentic life?
Honestly, it’s the people I’ve been surrounded by, always encouraging me. I did struggle with my sexuality a lot, and expressing myself. It’s all about the people that you surround yourself with. It’s also unwinding the things that I’ve learned, growing up and applying new things to myself – if you know what I mean? Getting rid of old thought patterns. It’s so hard to do that, but you have to keep yourself surrounded by supportive people.

You wrote Makeup Drawer when you were 14, which is pretty impressive. Have you always had a passion for music?
Yeah. I started producing music when I was nine. The lyrics came when I was around 11. I started making EDM and techno music! I then discovered different types of music and I was like, ‘Okay. I can add lyrics and stuff.’

Which artists have influenced your artistry the most?
[Laughs] I said it once and I’m going to say it again: Lady Gaga! I know, it’s such a classic thing for a gay person to say, but her impact is so incredible. She was 100% herself, and the media just viewed her as such a… I don’t know. I just put her on a pedestal so much because she is unapologetically herself, always. I saw a video of her in, I can’t remember which country, but that country was facing a lot of homophobia. She performed at that country and she, on stage, yelled to the government, ‘Arrest me!’ It was crazy, and that’s the reason why she’s my favourite because she does stuff like that. It’s doing a lot more than the pop girls these days, I’ve yet to find someone to be as captivating as Gaga.

When you saw that video, what impact did that have on you as a young gay kid?
That made me feel like people actually cared about my sexuality. For her to do that… I got chills. I remember the first time I saw that because she was willing to put her life literally on the line. I’m pretty sure in that country you can get murdered for being gay, and the fact that she did that, it’s crazy to me.

At 17, you’ve amassed quite a bit following on social media – how are you dealing with all this fame?
To be honest, it doesn’t impact me as much. I’m still not in my developed mental stages, but it’s interesting when a lot of the support comes from behind a screen. At some points you feel it, at some points you don’t. I get comments saying, ‘I love you king!’ and it’s so easy to dismiss that, but over the past year while I’ve been going through this personal transformation, I finally feel that love. It feels really good. I think I’m at a good stage when it comes to social numbers and stuff, it’s a perfect balance. But when I get bigger, I don’t know, things might change. I just want to see how things pan out.

I’m not surprised, you have that sarcastic demeanour about you on social media that ‘Stan Twitter’ seem to love, and you don’t take yourself too seriously.
I do not at all. Never! My fans are like my besties. They’re all around my age, or older. I would say that the oldest fans are 20, 21 or 22, maybe.

I’m 26, you need to increase that number!
[Laughs] Well, I would say the majority of the one who keep track of me. If it weren’t for them, I wouldn’t be anywhere. I wrote a song for them on my upcoming EP, it’s called Colony. It’s an ode to them because their love saved me a couple of months ago.

How would you describe the sound of Isaac’s Insects?
I would say it’s rooted in pop music, but it definitely branches out into many other sub-genres. For example, Makeup Drawer and Commes Des Garcons, I would say they are the most pop on the record. The other ones are very derived from pop, but different. It’s a collection of songs that I’ve worked on for the past year, and it’s an elevated sound from Balloons Don’t Float Here, my first EP. It’s definitely more rooted in what I used to listen to when I was younger, like the EDM influences, how they layer synths. I’ve learned a lot from producers in studios and writers, and just getting all their advice and trying to make this record perfect. I’m really proud of it.

Do you have a good support system behind you?
I do! I send all my stuff to my A&R’s and they criticise me and give me notes to make everything perfect. It’s the best to have people who tell you that your shit sucks, or if it’s good.

Which producers would you like to work with in the future?
I want to work with Joel Little, he is a genius, and I would like to work with Jack Antonoff. The Swedes are so talent, so any of the Swedish team like Max Martin’s people, they’re geniuses! I would love to sit in a room with them one day, if I ever get a chance.

Do you have plans for a full-length debut?
I do! I have the whole concept and everything, it’s just a matter of timing and just finishing the songs. During this COVID thing, I’m making a goal for myself to write an album by the time this is over. I just want to see what happens, but I have the concept already.

What is it like for a recording artist in quarantine?
I haven’t talked to many other artists, but for me personally, it gets really overwhelming when every single thing is online. You definitely have to get hands on as an artist and film your own videos, your own interviews to send to this person, that person. It’s making me more hands on, which I’m honestly grateful for. It’s making me work harder, I guess! For a lot of other artists, they’re delaying releases because they all revolve around tours and stuff. If you’re a bigger artist, I feel like it sucks more compared to a developing artist because you can just drop music and gain an audience way more easily. Developing artists don’t have as many rules, I would say.

What tips do you have for your insects who are currently bored in isolation?
Create art in any way. Play with your clothes and cut them up, bleach them and do tie-dye stuff. Anything that passes time. Anything that you can do. Go through your old yearbooks and cook meals, and do in-home exercises. I’ve just been trying to find anything to do. I’ve been watching a lot of space and alien conspiracy theory videos, and that’s been taking up a lot of my time [laughs].