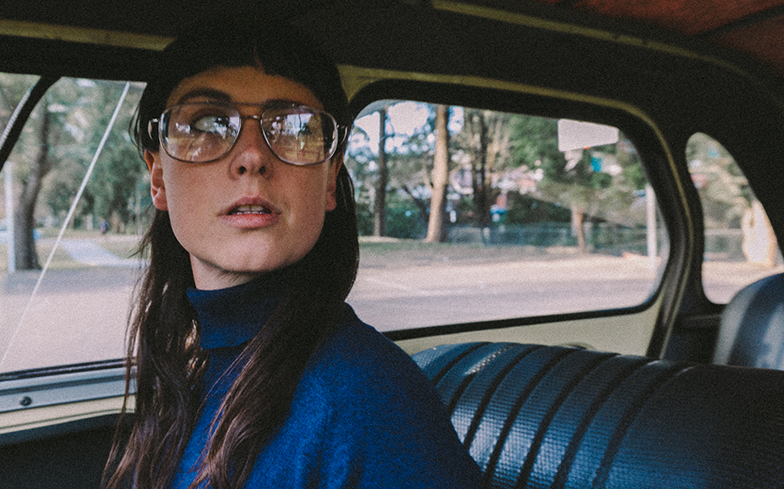 “Making music and making art is always better when it’s you and the way you express yourself.”

Sydney based performer HANDSOME (Caitlyn Parks) released her debut EP No Hat No Play last month, a five-track collection of brooding, “tomboy pop” electronica. Upon release, it received acclaim for its themes of LGBTQ solidarity, self-expression and for being unapologetically queer.

However, HANDSOME wasn’t always this open about her sexuality within her art. Over the phone, she told us that the devastating events of Orlando was a defining moment in how she chose to authentically present herself through music. “That was a catalyst moment to be like, ‘I’m making music and this is fine, but I’m not making music that changes people’s lives, and I’m not making music that rattles people’s cages, and makes people feel excited about who they are.'”

In our interview, we discussed the queer coming out story of her single Late Night Ball Game, living in Australia during the controversial same-sex marriage debate, and her love for Winona Ryder.

How did you come up with the name HANDSOME?
I have been asked that question a lot, but it’s a good question to ask, and I came up with it for that reason. There are a couple of reasons, I love the sound of the word when you say it out loud. There’s a kind of romance, I think about the word, especially when it’s associated with women. There’s a character I’ve created in my head that’s called HANDSOME, which is not me in the slightest, but I like her. A huge part of it has to do with challenging gender and sexuality, and I wanted to be able to have a name that felt like me, but also asks those questions and have people challenge the fact that language and words can say so much. It feels similar to how drag queens take on an identity to challenge gender stereotypes.
Yeah, and there’s a real power in the queer community, in a sense that there’s a time in our lives where we have to turnaround and be proud of who we are. At that moment, you can make a decision wholeheartedly on who you are, and feel really great about it. That was another element with HANDSOME. I really object with the meaning of the word. Even though I identify as female, or she, when somebody says, “Oh you look so pretty today”, it makes me feel really uncomfortable. It’s just not something I identify with at all. When somebody says “handsome”, I have the ability to open a door for somebody, being romantic in that sense.

I have to say, it’s hard to Google you. I’d put in ‘HANDSOME artist’ and it would just come up with attractive male singers.
Yeah, exactly! I’ve had a lot of people on social media just say, “You know how hard your name is to Google?” I don’t think it’ll ever get higher than probably page seven.

When did you realise you wanted to be a musician?
I’ve been a musician since I was nine when I started playing the saxophone, of all things. To answer that question, in the way of pop music, probably when I was maybe 17? My sister introduced me to a lot of new music that I listen to now. When I started listening to music in a way that made me negotiate emotion was when I thought, “Oh my god, maybe that’s what I wanna do.”

Who were your inspirations growing up?
It’s really funny, growing up as a musician in my 20s, I was like, ‘Oh my god, there are so many female musicians who are gay.’ And a lot of them I knew personally kept it quiet. I feel like a majority of female musicians are gay. People need to know this! A lot of male musicians I know are queer as well. I love Cat Power. I love Joni Mitchell. I loved actresses like Winona Ryder, because she was a tomboy, and Angelina Jolie. I couldn’t tell if I wanted to be her or be with her. I had these massive posters of Angelia Jolie and Drew Barrymore in my house. I don’t know if my parents ever clicked at that stage! I idolised them but wanted to be their partner [laughs].

I also had posters on my wall of actresses and singers who I thought I fancied but it turned out I wanted to be them.
Yeah, it’s a kind of a mismatched feeling. It’s really hard to describe. I don’t think you could ever describe it to anyone that hasn’t actually experienced that. There is a mad grey area of sexuality, and I’m sure that all the straight people we know have felt like that at some point in their lives.

You describe your music as “tomboy pop”, how did you coin that term?
I don’t know, it’s just how I feel it sounds. There’s playful elements to it, but there’s also a lot of power and a lot of tongue in cheek, cheeky lyricism. There’s also a lot of grunt in it, and I think it’s also extremely unapologetic and I feel like that’s what I was like growing up, and in a stereotypical tomboy way. Winona Ryder was the ultimate femme/masc, and she used to wear caps and caps backwards, and smoke and just be a badass.

You said your single Late Night Ball Game was a queer coming out story.
It’s a mishmash of a bunch of different stories, but it’s inspired by my friend who came out as trans. It was the first time I’d experienced that at close range, in my own friendship group. I was absolutely floored by his bravery, and I had no idea. I had absolutely no idea, so I was taken aback in a way that gave me a moment to stop and stand back and look at all my friends and consider how strong they are. The “she she she” part of the opening of the song is a comment on the way he felt for a majority of his life, being called a she. It goes through the horrible and intense anticipation, terror and also elation that you feel when you come out. It was fun to experience that in all of these weird, terrifying and releasing feelings, because it was the first single as HANDSOME. I felt like I was coming out all over again. All these people started contacting me, saying it gave them strength to come out, and made them feel like they were powerful and part of a community that loved them.

The single came out around the time of Australia’s marriage debate. What was it like living there during that time, because the amount of opposers was alarming.
Yeah totally. It was a really weird time. At the time, me and my girlfriend were living outside of Sydney, and we would get on a train and feel uncomfortable. I would feel like people were looking at me in a wrong way, and all of our community felt like that. Everyone felt scared, we didn’t wanna walk down the street holding our partner’s hands. I don’t wanna overdramatise it, but there was a sense of that around my friends and my chosen family. When it happened, it was amazing. I was like, ‘Oh my god, thank god we won.’ If it didn’t happen, I think the terror would’ve risen. At the same time, we all felt so let down. That was the main thing. Our government had the ability to have a vote inside the parliament, and just get it over and done with. Instead, they dragged us through the mud in this really long campaign, which is actually still kind of going on. A lot of trans issues are going on at the moment in Australian politics, which means that a lot of young trans kids are being exposed to a lot of homophobia and it’s continuing on. I wrote Late Night Ball Game almost a year previously, so it was never a part of that in a way, but I think everything trickles down into a bottleneck when that’s just the way that people are feeling. When it was announced, we just couldn’t believe it. The day that my EP came out, which was last week, was a year to the day when me and my girlfriend had to post our yes votes. It was a really sad and confusing and scary time I think, for a majority of queer Australians.

As HANDSOME, you’ve been open about your sexuality from the start. Was that important for you to do?
Yeah. I released music four years ago as Caitlyn Park. I was making music and wasn’t visible with my sexuality, like I didn’t hide it from people at all, but it wasn’t a part of my music. There was a couple of different things that changed in my life, intensely, to make my decide to change the project up and do something super different. One of them was the group of friends that I started hanging out with, especially after I started dating my current partner, because she opened me up to going to gay parties and experiencing queer culture like I’ve never experienced before. I learnt how to dance, and I learnt that dancing was liberating, and fun, and incredible. Then I started listening to new music, and a friend of mine called Kat Dopper who runs a party in Sydney called Heaps Gay, she ran a party one night and we were all out until 6am. We got home, and me and my girlfriend were huddled around a heater, and it was the first time we read about the Orlando shooting. It was a real crazy, scary moment for a lot of me and my friends, because we had just been to a gay party. Seeing that – and it’s guaranteed, probably that will never happen here because guns aren’t legalised – shows that this can still happen because of somebody’s sexuality. That was a catalyst moment to be like, ‘I’m making music and this is fine, but I’m not making music that changes people’s lives, and I’m not making music that rattles people’s cages, and makes people feel excited about who they are.’ That was the moment I felt I needed to do something different, and it feels so good because it’s me. Making music and making art is always better when it’s you and the way you express yourself. Fans and people listening really respond to that, because they totally know it’s all you.

Listen to HANDSOME’s incredible track No Cowards from her debut EP, No Hat No Play.