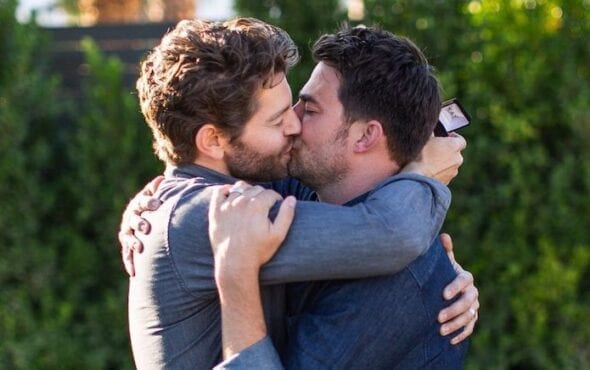 Jonathan Bennett has announced his engagement to his longtime partner Jaymes Vaughan.

On social media, the actor – best known for his role as Aaron Samuels in Mean Girls – shared adorable photos from the proposal alongside the caption: “I said yes! And ugly cried like a crazy person.

“So excited to to share this moment, from the custom rings he had made for us with @kayjewelers to the song he wrote and sang for me. Can’t wait to show you the video this week.”

Vaughan, who is a television host and producer, said he feels like the “luckiest man alive” and “can’t even fully process it yet”.

In an interview with People, Vaughan explained how he wrote a song to coincide with the proposal, which was “very personal” to Bennett and “designed with how I knew he’d sing it back to me.”

Bennett said: “It’s hard for me to really remember the rest because I think my body just decided to black out and ugly-cry. All I was doing was ugly-crying. But I just remember feeling like I was home.

“I knew from the minute I saw him with the sign I was getting proposed to.”

Daniel Franzese, who co-starred alongside Bennett on Mean Girls as Damian, thanked Vaughan for “making my friend so happy”. Bennett recently starred in the first ever LGBTQ+ Christmas film for Hallmark.

The Christmas House follows Brandon (Bennett) and his husband Jake (Brad Harder) as they visit Brandon’s parents for the holidays, during which they are “anxiously awaiting a call about the adoption of their first child.”

The film includes Treat Williams and Sharon Lawrence as their parents Bill and Phylis, who hope that “bringing the family together to recreate the Christmas house will help them find resolution and make a memorable holiday for the entire family and community.”