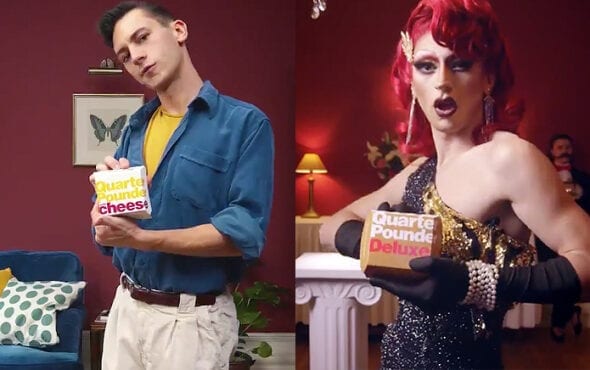 McDonald’s have launched a new advertising campaign that features both drag and double burgers and we are lovin’ it!

The fast food chain has shaken things up a little with a drag-inspired mini advert for its much beloved Quarter Pounder burgers.

Appearing on Twitter, this quirky ad takes inspiration from the current social trend of TikTok transitions, and briefly shows a man holding a McDonald’s Quarter Pounder cheese burger which quickly switches to a glamorous drag queen decked in red and gold make up now holding a Quarter Pounder Deluxe. Now that’s what we call a glow-up, people.

As drag continues to push its way into the mainstream, it’s yet another moment of representation from a globally-recognised brand.

However, there are people out there who, at best don’t have a sense of humour or fun, and at worst are downright homophobic and bigoted, and have threatened to boycott the brand or questioned the need for including drag representation.

One Twitter user posted: “Well boycotting this one will be good for my health too. Think I have had my last McDonald’s”.

Another user questioned the “need [for] a man in drag advertising a burger?”  Some online accounts have even been using the ad as an opportunity to mimic identities in suggesting they “identify as a burger”.

The remarks have not gone unnoticed as other online users have been calling out the distasteful remarks and replying in favour and support of McDonald’s.

Drag may have gone mainstream but don’t be fooled to thinking it’s still not a political and radical act. Even when it comes to selling a Quarter Pounder Deluxe.