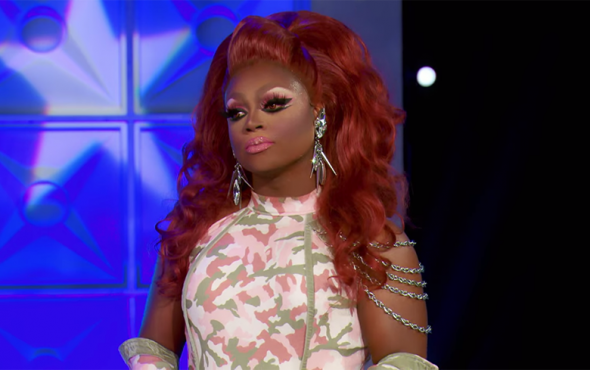 Mayhem Miller has revealed why she chose to send herself home on Drag Race.

Earlier this month, the legendary queen became the fourth contestant to sashay away from All Stars 5 after receiving mixed critiques for her performance in the SheMZ! maxi-challenge and for her camo-inspired runway.

During Untucked, fans were shocked to discover that Mayhem followed in the footsteps of Ongina earlier in the season (and BenDeLaCreme in All Stars 3) by choosing her own lipstick, essentially eliminating herself from the competition.

Speaking to GAY TIMES, Mayhem explains: “I voted for myself because I strongly believe our team was going to be at the top. To be in the bottom was a gag and it hurt, because me and India worked our butts off.

“I wasn’t going to campaign against her because I believed in our work. That only leaves one other person, and I’d much rather leave the competition on a good note and honour my word to her and, as a partner, respect her.”

Mayhem says she’s now “at peace” with her elimination and is pleased that she can now watch the season as a fan. “I love Drag Race, and I love drag. Leaving the show is not a bad thing – it’s a good thing this time around,” she continues.

What made Mayhem’s elimination even worse is that Morgan McMichaels, her best friend of 20 years, served as that week’s lip-sync assassin and was responsible for revealing Mayhem’s lipstick and eliminating her from the race.

However, Mayhem jokes: “It was great to see her face crack!

“It wasn’t as hard of a punch because it came from someone who I’m close with for over 20 years. It was a funny moment to see her sad, but it was a good feeling to have the comfort of home when it could feel like a sad moment.”

When asked what else we could’ve expected from her this season, she reveals: “You could have expected the party to continue! I was having such a good time. It would’ve been fun to see how much fun I would have had in the competition.”

Next week, the five remaining contestants – Alexis Mateo, Blair St. Clair, Jujubee, Miz Cracker and Shea Couleé – will join RuPaul’s family for the Charles Backyard Ball, where they will strut down in the runway in two sizzling looks.