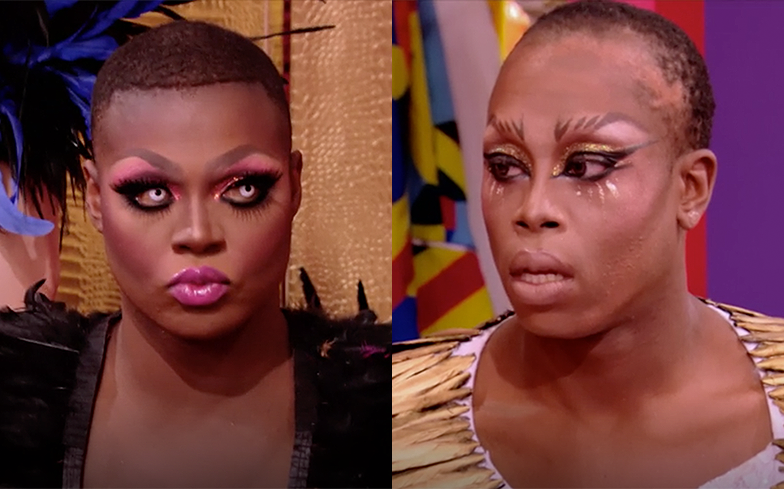 “It’s hard to get a word in with you big mouth bitches.”

Mayhem Miller and Monique Heart wage war in the sneak-peek for the upcoming episode of RuPaul’s Drag Race.

In the preview, the queens breathe a sigh of relief as they ru-turn to the workroom after Yuhua Hamasaki’s elimination, but the drama from the main stage – and Untucked – is still fresh on their minds.

During their critiques, Mayhem blamed Monique for her position in the bottom two: “She [Monique] was our team leader. She was very direct at what she wanted, so I was like, ‘Okay, I’m gonna fall back’, because I know if I was trying to enforce something, I would get shut down.”

Monique addresses the group: “In Untucked, Eureka brought up the fact that I was thrown under the bus, and that really made me feel a type of way about my teammates.”

Defending her comments, Mayhem tells Monique she didn’t throw her under the bus, leading her to respond: “Where did that come from? I didn’t boss you, but I kept going back to make sure, ‘Were you okay?’ because you were so quiet.”

“This is not about RuPaul’s Friends Race. This is about me getting 100,000 dollars, and getting you bitches out of my way.”

Monique – fed up of all the shit – states: “That’s how you feel, done and done. Game on. America, the bible says that what is done in the dark will be brought to light mother darling. The light’s on.”

The queens soon forget about the drama, because for this week’s main challenge, the contestants are required to create three looks based on climate change; Alaskan Winter Realness, Miami Summer Realness, and Martian Eleganza Extravaganza.

A design challenge of this scale usually doesn’t come around until the top five, so the queens are gagged.