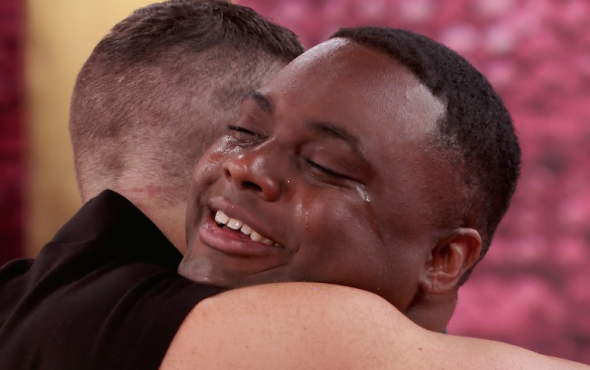 Last week, the former became the fourth queen to sashay away from RuPaul’s Drag Race All Stars 5 after receiving mixed critiques for her performance in the SheMZ! challenge and her camouflage-inspired runway.

What made her abrupt elimination even worse is that Morgan, her best friend of 20 years, served as this week’s lip-sync assassin and was responsible for revealing Mayhem’s lipstick and eliminating her from the competition.

As Mayhem packed her belongings in Untucked, Morgan paid her a visit and shared some beautiful words about her best Judy that sent Mayhem – and Drag Race fans – into meltdown mode. There were lots of tears.

“I didn’t want it to be you,” Morgan told her sister. “I’m so proud of you. I love you so much. You’ve been my best friend for 20 years and you’ve made me a better man and a better queen. I just adore you to death.”

Mayhem then joked that she just wanted $100,000 doollahz and berated Morgan for making her cry.

Like most relationships between sisters, their heartfelt moment turned into a hilarious bicker, where Morgan shades Mayhem’s romper and messes up her packing regime, before sashaying away and leaving her alone.

“Morgan and Mayhem about to make me cry. So sweet! We stan this type of friendship,” wrote one fan and same. Another tweeted: “I’m glad we at least get to see other sides of the show instead of just what was depicted in the main.”

Morgan and Mayhem about to make me cry. So sweet!! We stan this type of friendship. The way she "helped" her pack 😂 #DragRace #AllStars5 #Untucked

That was really moving and I’m glad we at least get to see other sides of the show instead of just what was depicted in the main.

mayhem and morgan in untucked 😭😭😭

I do love seeing the friendship between Mayhem and Morgan, had no idea they knew each other for that long #Untucked #AllStars5

I know they're just best friends but I got kilig watching Mayhem and Morgan in Untucked.❤️

But that ending of Untucked with Morgan and Mayhem 🥺🥺🥺

That moment between Morgan and Mayhem on #Untucked. 😭 #DragRace

okay but this mayhem and morgan convo has me feeling some type of way #AllStars5 pic.twitter.com/yxJ6h4fCMn

Morgan and Mayhem are literally the best

On next week’s episode of RuPaul’s Drag Race All Stars 5, the six remaining queens will play… the Snatch Game!

Like All Stars 4, the contestants will be tasked with wooing two celebrity guests, Tommy Dorfman and Jeffrey Bowyer-Chapman, with their most hilarious celebrity impersonations and flirting skills.

All four episodes of RuPaul’s Drag Race All Stars 5 are available to stream in the UK on Netflix.