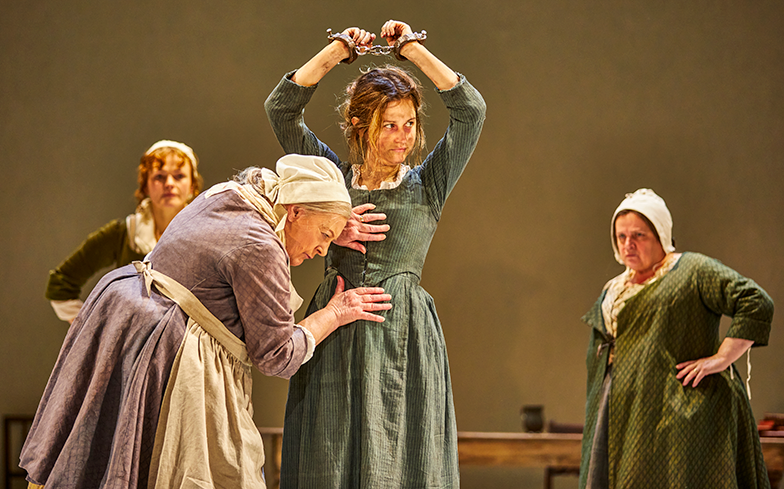 Making its world premiere at the National Theatre, The Welkin is sometimes brilliant, often bizarre, and quite unlike anything we’ve ever seen. It’s very evidently a period drama, but the staging is sometimes startlingly contemporary. Although it’s a fictional tale, there’s historical truth in the events that unfold. 18th century justice did not want to harm an unborn baby, so if a convicted criminal was pregnant, a jury of a dozen women could be employed to determine whether or not the accused really was with child.

The fictional prisoner here is Sally Poppy (Ria Zmitrowicz) who has been found guilty of the brutal murder of a young girl. She has been sentenced to hang, but if the women deem her to be pregnant, Sally will be exiled instead. The play drops a dozen characters on its audience at once – which could be overwhelming, but it’s done incredibly well. Each woman is sworn in and gives a one sentence introduction to herself, which offers a surprisingly full snapshot – and often pretty amusing insight – into the type of person she is.

The bulk of the play comprises a lengthy deliberation as to whether or not Sally is pregnant. It unfolds in a locked room where the women have no access to food or water – the idea being that this will help them return a verdict more quickly. Act one is pretty punchy; full of witty dialogue and surprisingly hilarious exchanges, it also establishes the various points of view of the assembled women, who test each other’s boundaries. Act two is less successful and seems to lose momentum a bit – it has an over-reliance on melodramatic reveals to keep things going – but it still benefits from regular injections of humour.

There are strong acting performances to be seen here. Maxine Peake, as local midwife Elizabeth Luke, is the big name draw and hers is an impressive turn, although we felt her character was written a little too earnest and self-righteous. National Theatre regular Cecilia Noble is strong as Emma Jenkins – hers is the funniest one-liner introduction, and she goes on to quietly command the stage for the majority of the show. It’s also a very visually appealing play – the costumes are great, the set looks gorgeous and there’s extremely effective use of light and shade throughout.

It’s far from perfect, however. We felt as though act two was sluggish in comparison to act one and, with the running time weighing in at three hours, it could have benefited from a little trimming. Most of the writing impresses but occasionally feels like it’s drifting towards idealistic clichés. It’s saved by some strong acting performances and witty dialogue, but we couldn’t escape the feeling that it all went a bit downhill after the interval.