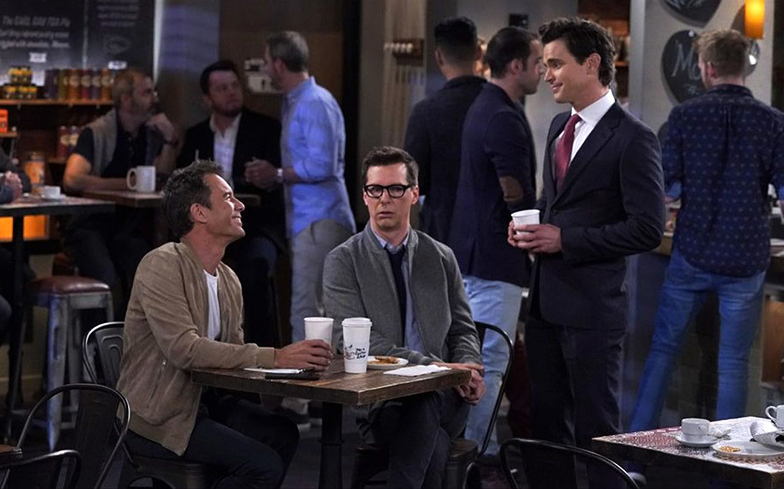 Will pretends to be a fan of RuPaul’s Drag Race in the upcoming episode of Will & Grace.

In a sneak-peek for the episode, which airs this Thursday at 9/8c on NBC, Will and Jack attend a gay cafe and come across news anchor McCoy (Matt Bomer) who overhears the two discussing the Emmy Award winning series.

“Who’s your favourite?” McCoy asks Will of the contestants, to which he responds with… nothing, because he’s blinded by his beauty and can’t even remember his own name. It’s understandable though.

Olympic athlete Adam Rippon also guest stars in the episode as a barista. What a line-up eh?

The rest of the episode will focus on Will and his attempts at charming McCoy with his knowledge of RuPaul’s Drag Race.

Last month, lead actor Eric McCormack said he wasn’t sure he’d be cast in Will & Grace if it was made in 2018.

The actor has played titular character Will Truman in the multi-Emmy-winning series since it first hit screens in 1998, becoming one of the first – and most well-known – fictional gay men to enter into people’s homes.

But unlike his character, Eric is straight-identifying, and two decades later where representation and diversity are such hot topics, Eric’s not sure he’d be cast in the role if it was made today – but he’s totally fine with that.

“I think it wasn’t a terrible thing in 1998 that a straight guy played the role, but I’m glad that times are changing, and I’m glad that nowadays a Will Truman would probably be cast with someone who is gay,” he told Sydney Morning Herald.

“But does that mean that now when you walk into a casting room you have to state whether you are straight or gay? I don’t know.”

He also said that playing Will on the show has allowed him the chance to “give back” the LGBTQ community.

“I get to be the straight-guy ambassador to the rest of the world for a community that has been shouting for a long time to be heard and to be recognised,” he said.