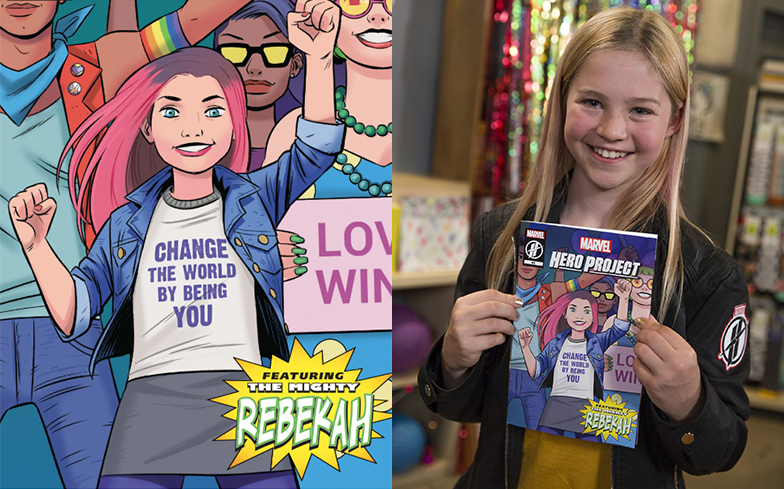 The studio’s new Disney+ series Marvel’s Hero Project celebrates real-life heroes, with each episode highlighting a child who has “dedicated their lives to selfless acts of bravery and kindness.”

When the Trump administration rolled back protections for trans students, Rebekah joined local LGBTQ equality groups to campaign for LGBTQ-inclusive education, becoming a role model for other trans children.

After speaking in front of the New Jersey legislature to lobby for Assembly Bill 1335, which would make LGBTQ history lessons mandatory in schools, Governor Phil Murphy signed the bill into law.

As well as featuring Rebekah on the show, Marvel have debuted a new comic featuring a superhero version of the young activist called Mighty Rebekah, which is available to read for free online.

In the story, Rebekah helps other children at an LGBTQ community centre after a vandal throws a brick through the window. She shows them that they can only become stronger by being themselves.

“No matter how many stones they decide to throw our way, we can’t let it break us. This is who we were born to be. No one can change that,” she says in the comic.

“If people took the time to actually get to know us, they’d see we’re just like any other kids. Same dreams, same hopes, same fears. And they’d see that we all want the same thing: to be accepted.”

Marvel have also announced a $10,000 donation to The Trevor Project, who support LGBTQ youth in crisis.

“It’s really surprising and cool,” Rebekah told Advocate when asked about Marvel turning her into a superhero.

“But I also think that it’s really important to have a transgender kid in one of these companies because representation is really helpful for kids who are going through their transition to know that they are not alone and that there are people fighting for them.”

You can find out more about Rebekah’s story and read her comic here.