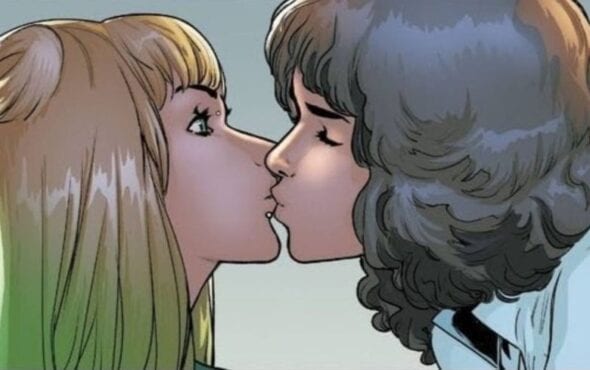 Kate Pryde, also known as Kitty Pryde or Shadowcat, had a same-sex kiss in the latest issue of Marauders.

Marvel fans are ecstatic over their new “bisexual icon” after Kate Pryde shared a kiss with a female tattoo artist in #12 of Marauders.

Kate made her debut in the Uncanny X-Men 40 years ago, and has the mutant ability to phase through solid objects.

During her 40-year history, Kate has had relationships with Colossus and Star-Lord from the Guardians of the Galaxy. However, fans have long speculated that she might be queer due to lingering sub-text and flirtatious dialogue with other female characters.

The latest issue of Marauders explains what happened to Kate in the first moments following her resurrection, after the character was killed by Sebastian Shaw. At a party, Kate catches the eye of Rachel Summers, a character that fans have long speculated she is in love with.

However, Rachel leaves before Kate gets a chance to talk to her, and so Magik teleports her away to get some fresh air. Kate then enters a tattoo shop, and kisses the female artist before leaving.

Fans were thrilled with Kate explicitly showing her sexuality, with one writing: “So, I never really got into Marauders when Dawn of X happened and now I’ve just found out they’ve finally cemented Kate Pryde’s status as a bisexual ICON.”

Another added: “The best part of the new issue of #Marauders is finally pushing the queer subtext of Kate ‘Kitty’ Pryde, out of the closet and just making it textual.”

So, I never really got into Marauders when Dawn of X happened and now I've just found out they've finally cemented Kate Pryde's status as a bisexual ICON. pic.twitter.com/HE0s7adzX3

The best part of the new issue of #Marauders is finally pushing the queer subtext of Kate "Kitty" Pryde, out of the closet and just making it textual. pic.twitter.com/IaBnCsJMwD

I’m not even the biggest Kate Pryde fan but this Marauders issue was everything I never knew I needed from her. Beyond happy for Kitty and can’t wait to see what this “New Phase” has in store for her. Thanks @GerryDuggan 🤘🏾 #XSpoilers

#XSpoilers Was Marauders everything I’ve ever wanted?? Of course not, but I think I’m going to save what it wasn’t for another day and appreciate that it was SO MANY THINGS I’ve wanted for so long! Yes I am a sucker but have you considered KATE KISSED A GIRL ON PANEL OH MY GOD🤩

#XSpoilers with Kate being canon queer we have now 3 X-Men series with canon LGBT characters as the main characters: Marauders with Kate, Excalibur with Betsy and X-Factor with Northstar.

#xspoilers Marauders 12: I’m good with the first woman we see Kate kissing on panel being a rando. It’s completely believable that she’d want to do that in a low stakes situation before actually initiating something with one of her two great subtextual loves (Rachel and Ilyana).

Kudos to @GerryDuggan for confirming something about Kate (Shadowcat) in Marauders Issue 12… something that has been hinted at for a very very long time. Her fandom is going to be very happy.

And Kate Pryde isn’t the only queer representation that Marvel fans are getting, as in #4 of Empire, the first same-sex superhero wedding took place as Hulkling and Wiccan tied the knot, the queer superheroes to successfully do so.

Queer Marvel fans have fully embraced and championed the relationship between Hulkling and Wiccan, with their co-creator, Allen Heinberg being surprised that fans had picked up on his subtle hints that the two were dating so quickly.