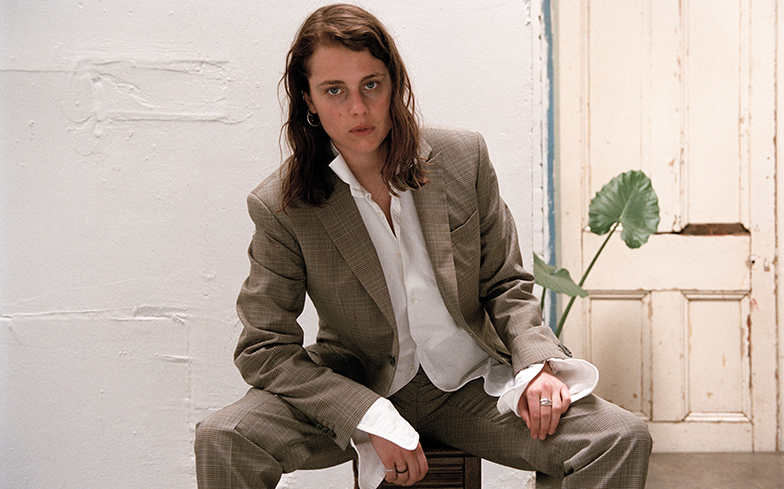 “There hasn’t been a really widespread voice for queer women in music as much as men.”

“I now feel like I can talk about my sexuality in the sense of just sex, and being single again and kind of exploring that,” she tells us of her songwriting process. “I didn’t sit down and think, ‘Oh I’m gonna step up the sex on this album.’

“It was more of where my head was at, and I felt confident enough to be really fucking direct with the lyrics.”

We caught up the British rocker over a cuppa in London Fields to discuss the themes on Any Human Friend, how she’s grown as an artist since her sophomore album, and the unfair stigma attached to women who are sexually explicit in their music.

I have to ask about the artwork – why a pig?
I chose a pig because we use pigs as an insult, and they’re seen as these dirty, stupid creatures. I feel like they’re really misunderstood, and we project ideas onto what it is to be a pig without actually understanding what it is to be a pig. I used to have some, and I have this scar on my eyebrows from a pig bite. She was a really nice pig, but I think she had just woken up… They’re very clever and actually really clean and they’re quite sexual. I think they can orgasm for an incredibly long time… They have the most similar genetic build up to human flesh which is why we do really horrible experiments on them, like ‘How long will it take a human to die in the cold?’ We just leave pigs outside to do that, and it’s because it’s the most similar like meat. So yeah, they’re actually so much more complex than we imagine and we put them in this horrible little box. For me, the whole record is kind of about how we need to stop coming up with ideas for who we think everyone is and just accept that people are who they are, and that encapsulates a whole different world of human emotions. So, I’m just kind of holding a pig like ‘Yeah it’s okay, you’re a pig and I understand you and this is fine.’

So the pig kinda ties into the album title?
The album title was from a documentary on Channel 4 where they put a bunch of four-year-old’s into a care home for people with dementia and degenerative diseases to see the impact on both levels and how they would interact with each other. It was a really successful experiment and at the end of the week, there were two little girls talking to each other and one of them says to the other, ‘Have you made any friends?’ and she replies, ‘Yeah, I’ve made loads of friends.’ The girl responds, ‘What, even with the old people?” and she says, ‘Oh yeah, any human friend.’ It was so pure and so simple. Take people at face value, just be kind. I think a child’s lens is really good for that because they haven’t lived enough to have kind of have that kind of pessimistic idea about certain things and they just have an incredibly sweet understanding. It’s been two years since your last album, how would you say you have grown as a person since then?
It’s been a really tough couple of years. I broke up with my girlfriend and we’d been together for a really long time. It had been a while since I’d been through a break up, and you kind of forget how fucking awful it is going through that turmoil. We got through it, both of us, and we’re still best mates. You know, I now live with a bunch of friends and I’ve made another record, I’ve managed to just carry on and do all this stuff and it makes you stronger and more confident, I think. It does make you more scared sometimes, in terms of jumping into anything new. I feel like I’ve kind of been working out what it is to be just like on my own again and kind of navigating that world. You forget what it’s like after four years of living with someone. But, you know, I’m here now and I feel like I’ve achieved a lot in the last couple of years. Despite everything else that’s gone on, it’s kind of a good thing driving forward, I can handle quite a lot.

Your work is always quite raw – is it hard at times to bare your soul so publicly?
It’s never hard in the writing, it’s sometimes just with the pre-release. Musically with this record, I’m kind of just excited to hear what everyone thinks. I had that with Boyfriend on the last album, I felt quite nervous about that and then as soon as it was out I was like ‘Fuck yes, this is great.’ I think I kind of learnt from that and realise that being really bold, open and brave is what makes me feel really good in the end. I was nervous about the artwork, when we were selecting the main image I was getting quite nervous about it just on a vein level. To be completely honest, I was just kind of like ‘Do I look my best?’ and ‘Do I look my hottest?’ But then, the other part of me is like, ‘This is exactly how you imagined this picture and it’s saying everything that you want it to say, and part of that isn’t you being perfect so just fucking deal with it.’ I was like ‘Yes, other side of brain, you’re correct!’ Then the evening of putting it out you kind of get a bit worried because the internet is quite a scary place and people can be really nasty about things, so there was a little part of me that was like, ‘God, are people just going to be fucking laying into me?’ As it turns out, they didn’t and that was really nice and, again, as soon as it’s out there that all goes away.

The whole album has a lot of different sounds, and it feels more sexually explicit than your previous work – was this intentional?
It does have a lot of layers, yeah. Boyfriend was such a moment for me with talking about my sexuality and really putting that out there, and I’d not really gone there before. It was a real focus point on the last record, so I now feel like I can talk about my sexuality in the sense of just sex, and being single again and kind of exploring that. I didn’t sit down and think, ‘Oh I’m gonna step up the sex on this album.’ It was more of where my head was at, and I felt confident enough to be really fucking direct with the lyrics, which was so much fun. But writing a lot of those lyrics was a struggle, at times, like Hand Solo.

You previously said that All Night was to an overtly sexual song about a woman and you aimed to “reclaim power” from the male gaze – why do you think females are still shamed for talking about sex in their music?
I would say that it’s such an internalised system that’s been set in place for so long, that it’s going to take a very long time before that’s completely unpicked. I’d say that, even if it’s not outwardly being shamed, there’s probably an element there of like disapproval or fear. I don’t know what it is from the male perspective or other women, I sometimes can find that kind of threatening, in a way. I find it really strange, but I was really excited to write a song from a female perspective about a woman and inhabiting that sexual energy. In a way, that hasn’t really been filtered through anyone else’s lens, which is what you see all the time. It’s always from someone else’s point of view, and that immediately becomes problematic. That’s the driving force behind that and keeping it really empowered, just a celebration of sex. It just happens to be about two women, I’m not being like “gay gay gay” throughout the whole song, it’s just using frank and open language. It’s just an experience to have sex, it’s normal. Like King Princess’ single, Pussy is God, it’s a breath of fresh air, especially because male artists throughout history haven’t received backlash for how they talk about women.
I think that’s the thing, I was not hearing this when I was 14, especially within pop music. That’s why King Princess and Hayley Kiyoko are great because they have a really huge platform. I wasn’t hearing it, and I hear men talking about fucking women all the time and it’s always about “fucking bitches” and it always brings the woman down to make her into this sex object. I just thought if I’m going to write a song about “fucking a woman” it’s going to be, ‘This is great, this is fabulous, you’re fantastic – let’s have sex!’

Do you also feel like there’s a stigma attached when queer women talk about sex, as opposed to queer men?
Yeah, it almost feels like it’s slightly harder to break through that wall in that sense. I have had this conversation quite a few times around this record, I’ve been trying to work out like where that comes from and I feel like being an openly gay man within this sort of creative art has always been something that’s been more recognised over the years. I also remember when I was at school, it feels like there’s roles that have been invented for men. For example, when you’re a teenager, the idea for girls having a gay best friend. It almost creates a safe space for them, even though it’s fucked up. The roles have been designed in that way, and I remember just thinking if I came out at school or into a public sphere, all the girls will think that I fancy them and the guys will call me a dyke. I don’t know why it’s within music too. It feels like there’s a lot of queer female voices at the front right now, which I think is really fucking cool because  there hasn’t been a really widespread voice for queer women in music as much as men, it’s an interesting conversation.

You said it feels like there are so many queer females thriving right now, why do you think that is?
I don’t know, but I feel like when I talk to young people and younger fans now, everyone’s quite fluid with their sexuality. It seems it’s not even a talking point and now I wonder, if I was at school now, how I would have felt. Maybe it’s just that everyone’s getting it, and if one person is brave and expresses themselves freely, that prompts someone else to do that. It definitely has a knock on effect and feeling safe in numbers is a really important thing.