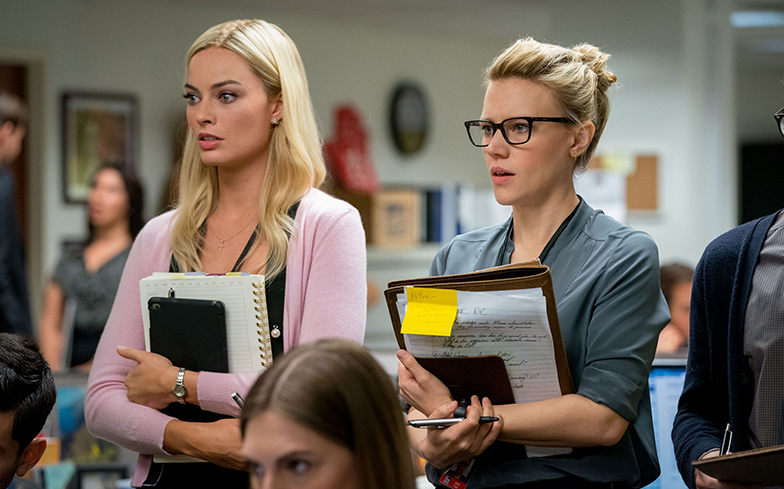 The star wants to explore her closeted character’s relationship with Jess, played by Kate McKinnon.

Margot Robbie has expressed interest in a potential spin-off film for her queer Bombshell character.

The biographical drama, which focuses on the stories of various female Fox News personnel and their sexual harassment claims towards the network’s founder Roger Ailes, included a surprise queer sub-plot with Robbie’s character Kayla Pospisil.

The ambitious intern is taken under the wing of Kate McKinnon’s character Jess Carr, a closeted producer who secretly stans Hillary Clinton and the Democratic Party; the complete opposite of Kayla, a die-hard conservative.

One night, the two sleep together and decide to keep their relationship a secret. This sub-plot is quickly shoved aside after Kayla is sexually harassed by Roger, with the rest of the movie focusing on the takedown of Ailes (played by John Lithgow).

In a recent interview with Variety, Robbie – who is known for diving deep into her characters, even off-screen – said Kayla’s sexuality was a “huge aspect of her story and emotional journey that’s unresolved”, adding: “I couldn’t just let that be.”

Robbie started wondering about what happened to Kayla after the film, revealing: “I secretly want a spinoff movie where Kayla and Jess go on a road trip with their opposing political views and their blossoming romance.”

However, Robbie said she sees her character as someone who “compartmentalizes” her attraction to women, saying she most likely won’t acknowledge her queerness until she’s in her 60s and boasts multiple heterosexual marriages.

The Australian actress said she spoke with Bombshell director Jay Roach and told him that the “endgame” for Kayla will be a homosexual relationship, saying she has a clear image in her mind of the woman she ends up with.

“Yeah! Jay was probably a little surprised, but entertained by that, I’m sure,” Robbie continued.

“I was like, ‘I know this doesn’t come into play in the movie, I just need to know what happens to Kayla.’ A character always starts off as just this bit of writing on the page. And then by the end of it, she’s such a real person to me.”

The film, which also stars Charlize Theron, Nicole Kidman, Connie Britton and Allison Janney, will be released 17 January in the UK.