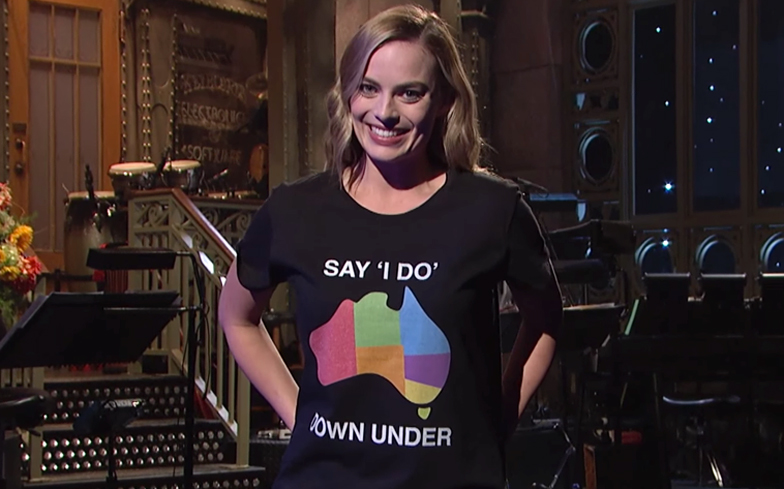 Margot Robbie has signed on to produce the Big Gay Jamboree.

The Hollywood Reporter has reported that Margot Robbie has signed on to produce a gay, comedy musical titled Big Gay Jamboree. She will be producing the film under her LuckyChap Entertainment company.

This won’t be Margot’s first time producing, as she has previously produced Terminal, and the Oscar-winning film I, Tonya. However, it looks like Margot’s role will only be behind the cameras, and she isn’t likely to act in the film.

Alethea Jones, who has directed award-winning films like When the Wind Changes and Lemonade Stand, is set to direct the film. Marla Mindelle and Jonathan Parks-Ramage, who both wrote The Devil’s Bitch, are linked to the project as writers.

Big Gay Jamboree will follow a woman who one day awakens on the set of a 1940s musical. She will begin to make friends while attempting to find her way back to her actual time.

The film is said to be a mixture of both The Book of Mormon and Oklahoma!, at least in tone.

When asked about the relationship between Harley and Poison Ivy, Margot said: “If you read the comics you know that Poison Ivy and Harley have an intimate relationship. In some comics they convey it as a friendship; in other comics you can see that they’re actually sexually involved as a couple.

“I’ve been trying to – I would love to have Poison Ivy thrown into the universe, because the Harley and Poison Ivy relationship is one of my favorite aspects of the comics, so I’m looking to explore that on screen.”