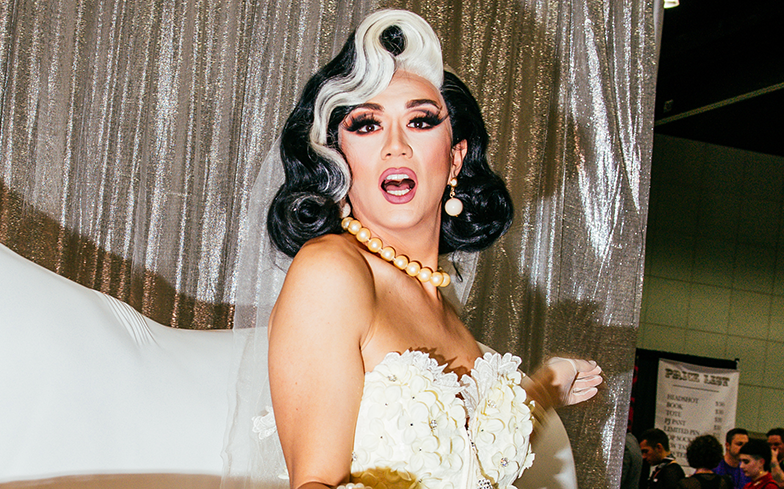 “I will keep coming back for Drag Race until I am an old man.”

Trust us when we say we were positively gooped and gagged when Manila Luzon was announced for this season of All Stars.

The legendary queen – who ranked second on the show’s third season and was unjustly eliminated in seventh/eighth place on All Stars 1 – is without-a-doubt one of the fiercest competitors in Drag Race HERstory. This season, she once again proved herself by winning two lip syncs and earning three consecutive challenge wins, meaning she now ties BenDeLaCreme for the most amount of wins ever.

In the latest episode, Manila was controversially eliminated by fellow competitor Naomi Smalls, which is the first time ever on the series that the undeniable frontrunner has been told to sashay away. We’re still not over it, but honey, Manila showcased her charisma, uniqueness, nerve and talent, and now boasts the desirable title of ‘robbed queen’, so she’s still a winner baby!

We recently caught up with the fan-favourite contestant to discuss her elimination, which queen she wants to see take home the crown, and whether she’d return to Drag Race for a fourth time…

Hi Manila! How are you feeling after your controversial elimination?
I am bummed that I had to go home but having my husband in the werk room and competing with me is just a reminder that RuPaul’s Drag Race is one stepping stone in my adventure. My adventure with husband is going to be exciting!

What made you want to return a third time for All Stars?
I wanted to come back to All Stars because my Fanila’s deserve to see what I have been up to and how I have grown as an artist. Is there anything you regret not showing on the season?
I have no regrets and don’t have time for them. I am really proud of my performance on the show.

How did your experience differ to your first time on the show?
My experience was very different because I came in with much more experience as a drag queen. I was able to compete with a better head on my shoulders and with costumes that weren’t just hot glued together – even though some are still hot glued together!

Out of your All Stars 4 sisters, whose picture would you like to see in the Drag Race Hall of Fame?
I would love to see my sister Latrice Royale in the Hall of Fame. If not Latrice, then my sister Trinity would look sickening, as long as it’s her crotch and not her face!

And who would you like to see on All Stars 5?
I would love to see Ongina, Mariah Balenciaga, Delta Work, Jiggly Caliente, and Jaymes Mansfield.

You’ve now appeared on Drag Race three times. Can we expect a fourth appearance?
Absolutely! I will keep coming back for Drag Race until I am an old man.

Over the past year, drag has become hugely popular in film and TV, with the likes of Dancing Queen, Super Drags, Dumplin’ and A Star Is Born. Do you think we’re about to see drag artists and trans people in more mainstream films?
Yes. I totally think so! And I would love to see drag queens as leading characters in more TV and film.

And finally, what can we expect from you in 2019?
I have a new song and video that just dropped, Go Fish, a new album, Manila Luzon dolls, and I will tour around the world!

The penultimate episode of Drag Race All Stars 4 airs this Friday on VH1 in the United States and Comedy Central in the UK.