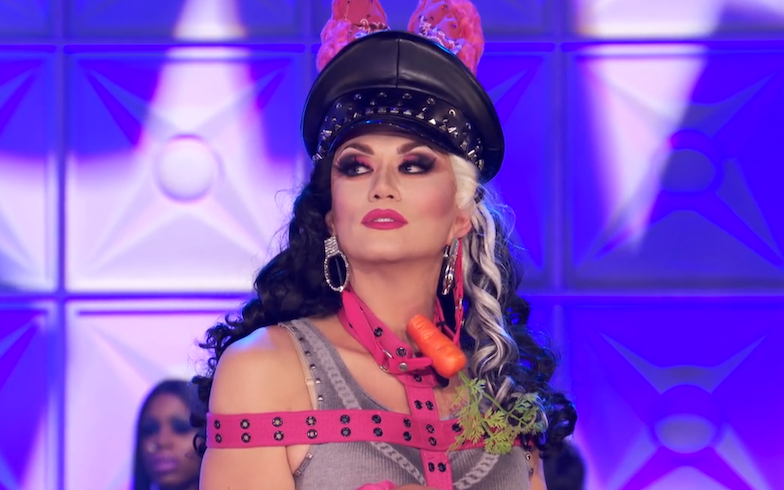 We know we said it last week, but honestly, the latest episode of RuPaul’s Drag Race was one of the best in the show’s HERstory. Yas All Stars 4 come thru!

For this week’s episode, the queens competed in the fan-favourite challenge, Snatch Game, but with a twist… This time, the contestants impersonated celebrities to win the affection of two dashing male suitors: Olympic freestyle skier Gus Kenworthy and Love, Simon star Keiynan Lonsdale.

Monét X Change (Whitney Houston), Naomi Smalls (Wendy Williams), Valentina (Eartha Kitt) and Trinity the Tuck (Caitlyn Jenner) vied for the attention of Gus in the first round, with the latter scoring the win. Naomi came a close second with her take on the American television host, and provided us with another soon-to-be iconic meme when she paid tribute to her on-air fall last Halloween.

Manila won the heart of Keiynan in the second round with a hilarious performance of EGOT winner Barbra Streisand, while Monique Heart, Gia Gunn and Latrice Royale impersonated Tiffany Haddish, Jenny Bui and Della Reese.

But did it all go smoothly? Absolutely not. Beforehand, Gia and Trinity came into conflict because they both chose the same character, Caitlyn Jenner. Then, Gia created further conflict and another case of “romper room fuckery” when she continuously interrupted Latrice during the challenge, which made the season four icon break character and unfortunately flunk her second Snatch Game.

After prancing down the runway to the theme of ‘Boots the House Down’, Manila and Trinity were declared the winners of the challenge, while Gia and Valentina were deemed the bottom two of the week. In our opinion, the judging this week was rather shoddy because the latter’s impersonation was eerily accurate, and although her answers weren’t the funniest, her characterisation was so hilarious it at least warranted a safe, but we’re not the judges, so…

During the tensest deliberation we’ve ever seen, Manila caused a massive stir (like we said in our headline!) when she openly admitted to Trinity that she’d considered sending home Valentina because she’s one of the strongest competitors. Later, Trinity passed on Manila’s comments to the season nine Miss Congeniality, who then provided us with the most telenovela-esque response: “So you’re saying I could go home tonight?” (see below)

The most touching moment of the episode, however, came when Gia confided in Manila about her trans identity, and how she didn’t want the show’s viewers to think of her as another “man dressed as a woman”. It was truly one of the most emotional moments of the entire series, because this is the reality of what Gia is going through every day. She is a woman who participates in the art of drag, and is the first openly trans contestant to participate on All Stars, so she’s understandably found it hard, especially because of RuPaul’s controversial comments about trans queens earlier this year. “I didn’t really expect competing in a drag competition as a transgender woman to be so hard and so emotional,” she revealed in her confessional. “I am overwhelmed.”

Trinity and Manila – two of the most sickening performers in Drag Race HERstory – then proceeded to lip sync for their legacy to Whitney’s 1985 Billboard Hot 100 number one single, How Will I Know, and honey… they put on a fucking show. (We’re going to need to update our lip sync ranking very soon.) Trinity served comedy, but it wasn’t enough to defeat Manila, who walked away with her first lip sync win since her iconic performance of MacArthur Park in the show’s third season. So, who did she opt to send home? Gia or Valentina? Ultimately, Manila decided to send home the former, but we predict this’ll come back to bite her in the ass. Will Valentina show Manila the same mercy in the coming episodes? Or is she about to get the boot? Manila deserves nothing but top two, so we’re anxious to see what the next few episodes have in store for us…

The preview for next week’s episode looks like it’ll be the most dramatic so far (and that’s saying a lot). The All Stars are tasked with improvising in a daytime court show called Jersey Justice. In the trailer, Valentina is livid with her fellow queens in the werk room and tells Trinity that she’ll send her home if she falls in the bottom two. We also witness Manila crying on Latrice’s shoulder… Does this mean they’re both up for the chop? Or is it just another case of romper room fuckery? And why is Valentina so mad?

The third episode of Drag Race All Stars 4 is available to stream on NOW TV.