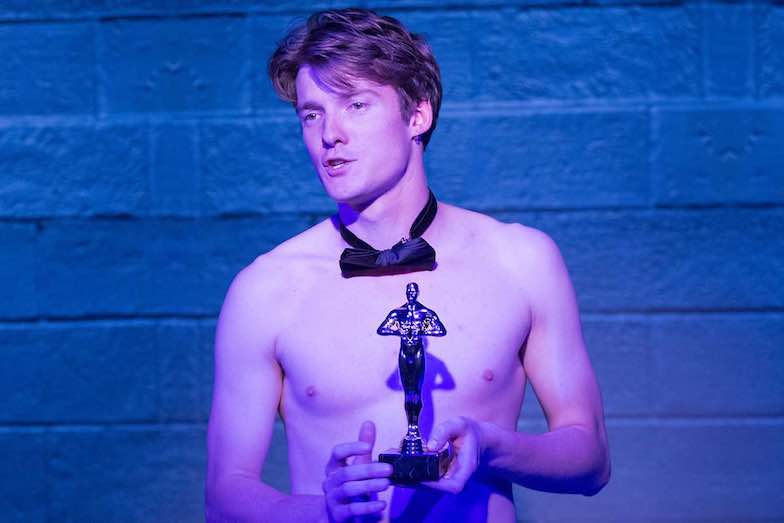 This frenetic farce from author Ronnie Larsen, currently playing at Above the Stag Theatre, lifts the lid on the gay adult entertainment industry of early 1980’s San Francisco.

This is an unusually shaped piece and is all the richer for it. There’s an hour or so of superbly entertaining screwball comedy before the interval, and then twenty five minutes of devastating consequences after it. Anyone with a passing interest in gay history will be well aware of which demon is likely to rear its ugly head in a piece set in the early eighties, especially one that focusses in on the sex industry. The real-life horror is dealt with in an effective and moving manner that well conveys the shock and disbelief at the disease that was seemingly targeting only gay men in San Francisco. As Arthur says in the play; it seemed like bad science-fiction writing.

Director Andrew Beckett has skilfully milked this script for every last drop of comedy, and has successfully created an hilarious homage to an era of adult entertainment that will be toe-curlingly familiar to all gay men of a certain age. Alexander Hulme as old-hand Ray perfectly personifies the whole period, flexing and strutting in a plumber outfit.

William Bull is a delectable delight as new-boy Ricky, and Sam Goodchild is brilliantly believable as frustrated thespian Jack. As Jack’s horrified wife Linda, Tanisha Spring is enjoyably effervescent, and Shakil Hussain gives an insightful portrait of a producer who’s seen it all before.

A particular delight is Lucas Livesey as Jamie, the production assistant who’s looking for something more. Livesey has the bulk of the emotional baggage to carry here and does it with aplomb – there’s something extremely reassuring about his stage presence and he has become very much a favourite Stag fixture over the years.

Funny, raunchy, and bittersweet, this is a fine solid piece of entertainment that’s absolutely worth your time.