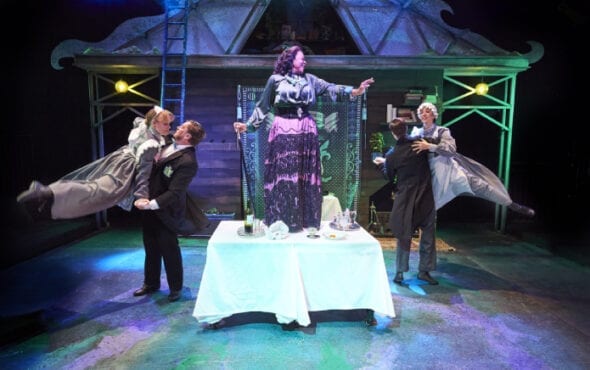 The new musical, directed by Charlotte Westenra at the Southwark Playhouse, is available to stream until 14 March 2021.

It’s been an incredibly challenging time for theatre makers and we were disappointed to hear that The Sorcerer’s Apprentice – which we had tickets to review in-person – was cancelled in light of the third lockdown being announced. With a lot of time and effort having already gone into making the show happen, we were delighted to learn that The Southwark Playhouse were planning to film a performance of the musical on their stage for audiences to stream from their homes. While we admire the determination that has gone into making this happen, it sadly doesn’t translate all that well to the small screen.

Most people will have the iconic broom scene from Disney’s Fantasia as their cultural reference point for The Sorcerer’s Apprentice, which was itself based on a poem. Stretching that material out over two hours has required some serious reinterpretation, and we now have a story set in the small town of Midgard which relies on the aurora borealis for its energy supply. There’s an eco-friendly sustainability narrative in here, featuring caricature capitalist Lydekker and eco-warriors Gottel (the sorcerer) and his daughter Eva (the apprentice). It sort of works, but the character arcs are entirely predictable and there’s little subtlety or nuance in here.

We’d like to stress that this isn’t a bad show – it provides a couple of hours of family friendly entertainment, there are some reasonable acting performances and it’s well-filmed and edited. It does however feel a little unremarkable – the music is perfectly pleasant but none of the songs really stayed with us, the plot is fine but lacking in excitement – the whole experience left us wanting something more. In fact, it just really feels like it’s lacking something. The magic effects – which we’re sure would read much better in the immediacy of the room – aren’t that impressive when we’re watching at home. Similarly, the choreographed numbers are all executed well, but lack immediacy because of the disconnect of watching on the screen. We feel this show may well earn itself a more positive review if we were up close and personal, but it just doesn’t suit the format.

We’re almost a year into this situation now, and many creatives have adapted what they’re doing, moving away from filming traditional performances in favour of innovative and bespoke experiences, specifically tailored for the small screen. Sadly, as a very conventional show, The Sorcerer’s Apprentice doesn’t quite cut it. We’d really like to experience an in-person performance sometime soon, but in the meantime we can’t honestly say it works all that well in its current form.