Madonna gives emotional speech about her experiences with the LGBTQ community 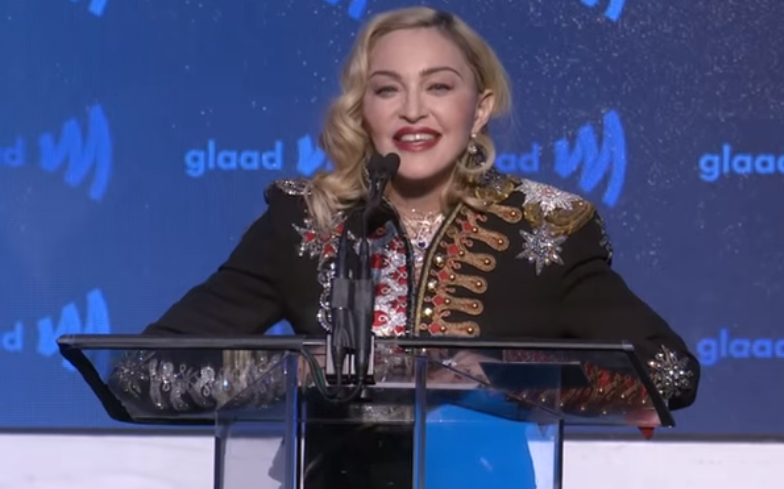 Madonna gave the speech after accepting the Advocate for Change Award from GLAAD.

Madonna started her speech by explaining why she fought so hard for LGBTQ equality.

“Why have I always fought for change? That’s a hard question to answer,” she said. “It’s like trying to explain the importance of reading or the need to love. Growing up I always felt like an outsider, like I didn’t fit in. It wasn’t because I didn’t shave under my armpits, I just didn’t fit in.”

She explained how it was gay man who first helped her to feel accepted. “The first gay man I ever met was named Christopher Flynn,” she said.

“He was my ballet teacher in high school and he was the first person that believed in me, that made me feel special as a dancer, as an artist and as a human being. I know this sounds trivial and superficial, but he was the first man to tell me I was beautiful.”

And speaking about her first experience in a gay bar, something that Flynn introduced her to, she said: “For the first time I saw men kissing men, girls dressed like boys, boys wearing hot pants, insane, incredible dancing and a kind of freedom and joy and happiness that I had never seen before.

“I finally felt like I was not alone, that it was OK to be different and to not be like everybody else. And that after all, I was not a freak. I felt at home, and it gave me hope.”

She then moved to New York City to start her career, but this coincided with the spread of HIV. “The plague that moved in like a black cloud over New York City and in a blink of an eye,” she described, snapping her fingers, “took out all of my friends.”

Madonna said she decided to take action after seeing her best friend, Martin Burgoyne, and roommate, Keith Haring, die from the disease. She spoke of the way she saw people suffering from the disease treated, saying: “It made me sick, it made me sad, it made me want to kick everybody’s ass.”

She described a hospital that she visited as feeling “like I entered a concentration camp. Emaciated bodies on every bed and these people who had been abandoned by their families.”

She said she set up the Rising Malawi charity, which helps children orphaned by the disease, because she saw “history repeating itself.”