Madonna accuses London Palladium of ‘censorship’ as she defies curfew 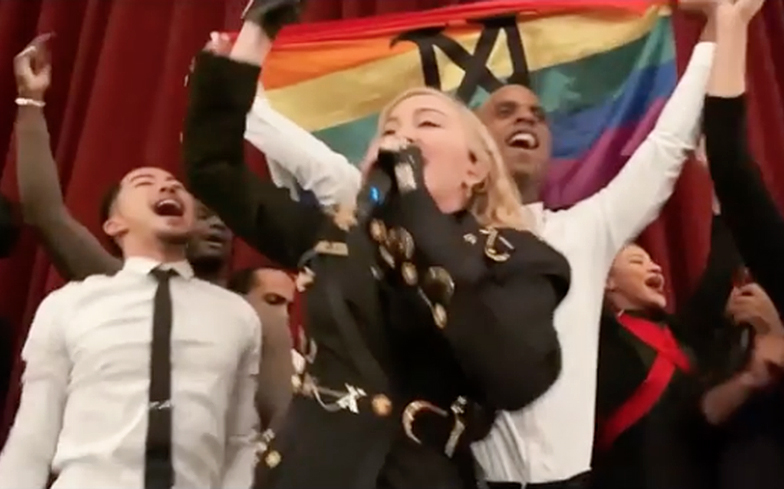 “Artists are here to disturb the peace.”

Madonna defied the 11pm curfew placed on her show at the London Palladium theatre on Wednesday (5 February) night, emerging through the already-lowered curtains to sing her final song, the Madame X ballad I Rise, without music.

In a video shared on Instagram, the Queen of Pop can be heard shouting, “Fuck you motherfuckers, censorship, motherfucking censorship, artists are here to disturb the peace,” before defying the strict curfew and performing the encore track.

Attempting to add clarity to the situation, Madonna wrote on Instagram: “It was 5 minutes past our 11:00 curfew – we had one more song to do and The Palladium decided to censor us by pulling down the metal fire curtain that weighs 9 tons.

“Fortunately they stopped it half way and no one was hurt. Many Thanks to the entire Audience who did not move and never left us. Power to The People!!”

One critical Instagram user commented, “Bravo to the theatre. You need to learn to not be super tardy,” to which the Queen of Pop replied: “You should stay home and rest!! This show is not for you.”

But fans who attended the concert praised her for giving the audience exactly what they came for, with one person calling it a “very iconic” moment from the pop superstar and another praising the “superb production” she brought to the stage.

London Palladium have since issued the following comment: “Contrary to a number of reports, at no point during last night’s performance did staff at The London Palladium pull down, or attempt to pull down, the Iron Fire Curtain.”