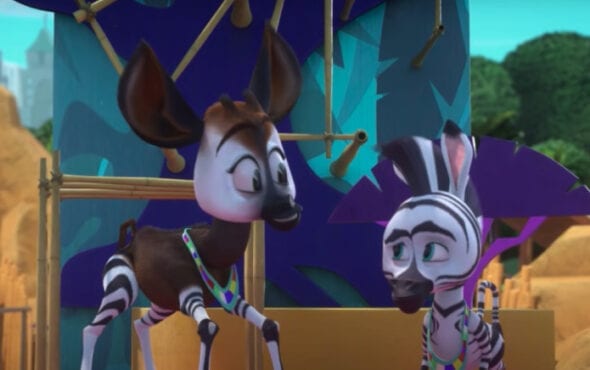 Odee the Okapi – who’s voiced by non-binary actor Ezra Menas –  made their debut in the series’ Pride episode titled, Whatever Floats Your Float.

In an interview with Entertainment Weekly, Menas opened up about the role, stating: “If I would have seen this when I was a kid, I don’t even know what I would’ve done.”

They continued: “This kind of acceptance and love and celebration, I think, is the biggest takeaway from this episode. It’s just a beautiful thing. Makes me cry.”

In the Pride-themed episode, the characters have been tasked with setting up the Annual Pride Parade. As the animals prepare for the special day, Marty the Zebra goes on a mission to help find Odee a parade float that fits their identity.

The episode features a brand new original song titled Be Proud which is sung by Menas.

The 30-year-old talent also talked about the lack of diverse LGBTQ+ representation in media and the impact of Odee’s emotive storyline.

“I think seeing Odee and the care from Odee’s friends would have made me not feel so isolated. At times, I felt so isolated in my experience. I didn’t know I was nonbinary as a kid. I didn’t even have that language as a kid.”

Menas went on to praise the creators for their relatable and well-researched script.

“As a non-binary person, I really resonated with this. This feels spot on. That gave me the confidence, just knowing that these people care about the stories that they’re telling,” Menas explained.

“The Whatever Floats Your Float episode of Madagascar: A Little Wild shows kids and parents that there’s a place for everyone to ‘Be Proud’ of who they are,” Blacklow said.

“The writers have crafted a beautiful episode about identity at a time when LGBTQ+ inclusion in kids and family programming is rapidly growing and more industry leaders like DreamWorks Animation are working with GLAAD to ensure that all families are represented on-screen.”

Watch a sneak peek of the Pride-themed episode below.