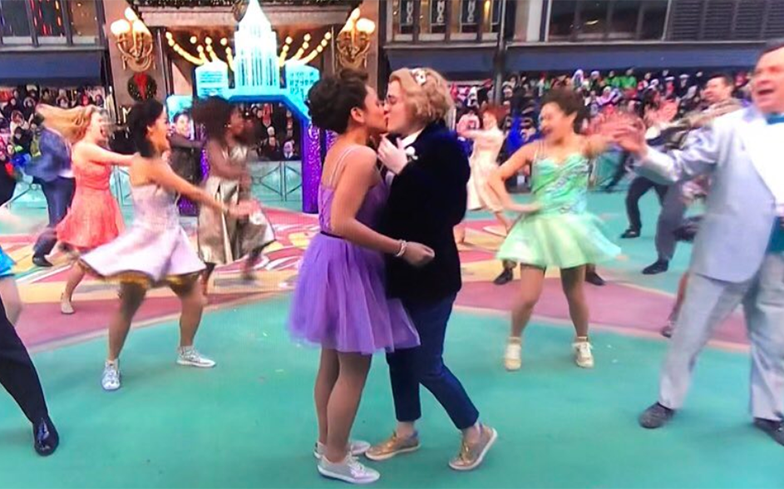 During a live performance of the new Broadway musical The Prom, actresses Caitlin Kinnunen and Isabelle McCalla kissed in what is believed to be the first ever LGBTQ kiss broadcast as part of the parade.

It’s the world’s largest parade and the second-oldest Thanksgiving parade in the United States, so it was a landmark moment for queer representation.

The kiss proved very popular on social media. Check out the best responses from Twitter below.

Thanks to Macy’s Thanksgiving Day Parade folks who did that open gay kiss. We are normal everyday folks who want to be accepted. 👩‍❤️‍💋‍👩🌈💕

Two girls. Just kissed. On live TV. On the Macy’s Thanksgiving Day Parade. I suddenly cried. Lovely. Thanks given to @ThePromMusical. (& Macy’s/NBC.) & lesbians everywhere. & turkeys. For their sacrifice. But esp. @ThePromMusical.

Thanks to Macy’s Thanksgiving Day Parade folks who did that open gay kiss. We are normal everyday folks who want to be accepted. 👩‍❤️‍💋‍👩🌈💕

I cried through the entire @ThePromMusical parade number! LOVE! JOY! And the @Macys parade’s 1st #lgbtq kiss ever! 😍😭🎉

.@ThePromMusical I love you! What a lesson you just taught the country on the @Macys thanksgiving parade! ❤️💛💜🧡💚💙

You know – I'm thankful for #20gayteen. I finally live in a world where national TV isn't ashamed to show this on a wildly broadcasted event. #representationmatters pic.twitter.com/t6oI2a8nzN

Cheering and sobbing watching @ThePromMusical on #MacyParade – cannot WAIT to see this show!

so uhhhh can we just talk about the fact there was a queer kiss on live tv during the Macy’s Thanksgiving Day Parade? my gay ass is LIVING

macys parade def just broadcasted a f/f kiss at 9am on Thanksgiving morning so hey: my day is going pretty well! were eatin good today gays

The Prom made its Broadway debut earlier this month, and tells the story of a lesbian in Indiana who is banned from taking her girlfriend to prom.

After the news is made public, a group of actors from NYC travel to Indiana in protest.

You can buy tickets here.