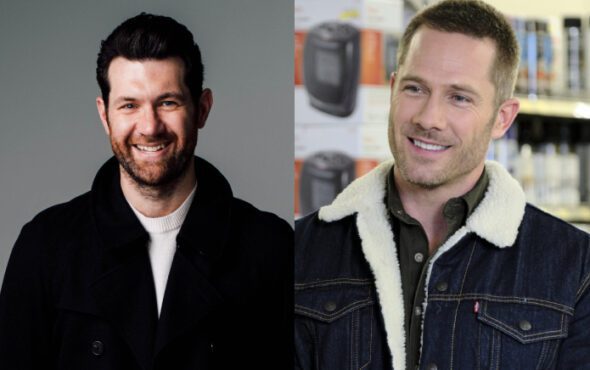 Luke Macfarlane has been cast in Bros.

The Canadian actor will play Billy Eichner’s love interest in the upcoming film, which will make history as the first gay romantic comedy from a major studio.

Bros will follow two gay men with commitment issues and their budding romantic relationship. Nicholas Stoller (Forgetting Sarah Marshall, Neighbors, Sex Tape) will direct from a script he co-wrote with Eichner, who will also serve as an executive producer. Emmy Award-winning filmmaker Judd Apatow is also on board as producer.

According to Collider, Eichner has lobbied for Macfarlane for the past two years. The star, who is gay, is best known for his role as Scotty Wandell on Brothers & Sisters. His character’s relationship with Kevin Walker (Matthew Rhys) was often noted as a highlight of the series.

Earlier this year, Eichner expressed his excitement for the film as he tweeted: “In shocking news, BROS will be the first rom com about gay men ever produced by a major studio and, apparently, I’m the first openly gay man to ever write and star in their own studio film. Only took 100 years! THANKS HOLLYWOOD!”

It was also announced recently that Eichner will star in a gay romantic comedy for Amazon Studios titled Ex-Husbands, which will follow Daniel and Connor – the first gay couple in New York City to get legally married in 2015 and the “poster boys for LGBTQ+ love and acceptance – with an epic wedding party to boot”.

The description from Deadline continues: “The only problem now is: they’re getting an even more epic divorce. It’s a War of the Roses-style battle for the ages as Daniel and Connor viciously, hilariously and poignantly become Ex-Husbands.” Ex-Husbands will be produced by Eichner and Greg Berlanti and Sarah Schechter for Berlanti/Schechter Films, with executive producer Michael McGrath.

In a statement, Eichner said: “The concept of a big, gay divorce comedy has been kicking around in my head for years and I cannot think of better collaborators than groundbreaking producers Greg and Sarah, and a true icon whose work I have craved and admired since I was a young gay boy lusting after show business, the brilliant Paul Rudnick who really paved the way for me and many others.

“And we now have the perfect partners in Amazon, who have already shown enormous passion for this project. This is a dream team.”

Eichner is shaping the future of queer cinema and yes, we love to see it.