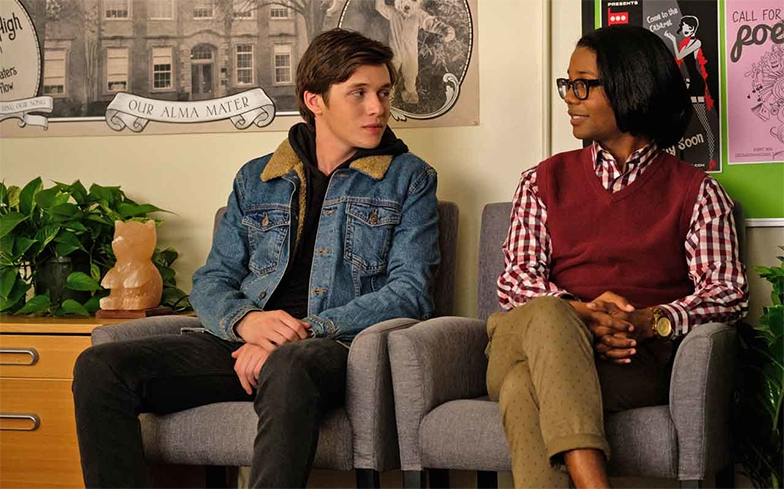 Clark Moore might just be the queer voice that Hollywood needs.

The 26-year-old actor plays his first major role in Love, Simon, the critically-acclaimed rom-com from 20th Century Fox that tells the story of a closeted gay teen who’s outed to his whole school during his quest to find love.

And while the star of the show is Nick Robinson’s Simon, a ‘straight-passing’ everyday guy stuck in the closet, it’s likely that many queer viewers will find themselves relating to Moore’s character Ethan, a new addition to the movie who didn’t exist in Becky Albertalli’s book.

As Simon regularly reassures viewers that he’s “just like you”, Ethan embraces all the things that make him different, and is refreshingly unapologetic about his place as a feminine gay man of colour at Creekwood High School.

“In many ways, Ethan is who I wish I could’ve been growing up,” the actor tells Gay Times. And, as you leave the cinema with a fuzzy heart over Simon’s new-found romance, there will probably be a part of you that feels the same.

We sat down with Clark to discuss his role as Ethan, the discrimination that still exists in Hollywood, and how he hopes Love, Simon will inspire a new generation of young gay black men.

What was your reaction when you first got to see the movie?
It was really exciting! I saw it for the first time back in September. I went to the Fox Studios lot to do some voiceover stuff for the film, and it happened to be the weekend that my mom was in town for Labour Day weekend, so I got to take her with me which was really cute. I got to have fun with my mom and it’s the first big thing that I’ve ever done, so I also felt pretty accomplished.

Had you read the book before you started filming?
I read it after I got the part, because I didn’t want to jinx anything. I don’t know if you’ve read the book, but my character isn’t actually in it, he was added into the film – which I am so, so grateful for – but I was a little sad when I read it because I thought, ‘Oh no, I don’t get to read about Ethan’. But I did enjoy reading it because it gave me an insight into Simon’s world, how he was thinking and his relationships with the other characters, and then I was better able to imagine how I could fit into that world.

Why do you think the story needed Ethan?
That’s a really good question. I don’t know if the story needed Ethan, but what I love is that Greg [Berlanti] built out the world in a way that was a little more inclusive – not that Becky’s book wasn’t, but by putting Ethan into this story, it sort of gave us an opportunity to see how people who experience intersectionality deal with this exact same thing. Like, the fact that Ethan is not only gay, but a person of colour, was a really awesome, strong and bold choice, and it gives more young people proxies to latch on to, in a way that they can see themselves in the story. It’s important to note that feminine gay men of colour don’t really exist in Hollywood, so you must feel the importance of that?
Absolutely. From the acting perspective, I’ve been living in L.A. for four to five years now, and I’ve been auditioning constantly ever since I got here. The reality is that everyone wants to do diversity, as it’s been the buzz word of late, but often times what that looks like is filling these quotas, and if you use up all your diversity on the one character by making him both gay and black, then you don’t really get to spread it out elsewhere. I’ve had times where I’ve auditioned for a role where they’ve said, ‘We decided not to go ethnic with the gay role’, and then they have another role that’s designated the ethnic role. So yeah, I’m very aware that we don’t really exist if you look at the landscape of gay narratives in Hollywood.

Have you found that you’ve been turned down for a lot of roles, then?
A lot, yeah, for sure. There have been a number of times where they’ve said, ‘We’ll see all ethnicities’, and then almost always they ended up going with the white actor. It’s hard because I don’t want to take any jobs away from anyone else – and oftentimes the actors who get the roles are friends of mine, or they played the roles really well – but at the same time it’s really hard to get a foothold because when you exist in between these two worlds you’re never quite enough for either.

How does your own experiences of growing up compare to Ethan’s?
There’s a lot of parallels for sure, I’m actually from Atlanta originally, that’s where my parents live now and it’s where I grew up, and that’s where the film is set, so there’s a lot of hometown feelings. But I would say that Ethan is a little bit more self-assured than I was, he’s far more confident and he always knows exactly what to say to get right back at the bullies. I didn’t quite have that, I mean I was outrageous and loud and loved attention – I was a theatre kid! – but I didn’t really have the quick comebacks, and I think of Ethan as being top of his class, smart as a whip, and I see him going on to change the world one day. So in many ways, Ethan is who I wish I could’ve been growing up.

In the movie, Simon suggests that life is “easy” for Ethan because everyone already assumes he’s gay, whereas he has always been in the closet. Would you agree with this sentiment at all?
So I remember when I was in high school, I had a thought to myself that if I continued to be effeminate – and that didn’t feel like a choice to me, it was just a natural way of expressing myself – then I would never have to come out again. I remember processing the trauma of coming out and thinking, ‘This is a really easy way to avoid that for the rest of my life’. So whereas people struggling with their sexuality may have gone the other way and leaned into a more masculine performance, I just sort of stayed in that safe space of allowing people to assume I was gay, and then choosing whether or not to affirm that. So in some ways I’ve had the privilege of not having to come out constantly like some people do, but on the other hand I also can’t hide. I’m very visible. Saying that I feel like a target seems too dramatic, but there is definitely also a privilege of being able to ‘pass’ as straight. From the acting perspective as well, there’s the side of it where straight people often get the privilege of playing gay roles, but rarely do gay actors get to do the reverse. So that’s my only worry, the limitations that come around there.

Love, Simon is being billed as the first major studio movie to have a gay lead character, do you think this shows we’ve reached a place of acceptance for LGBTQ people, at least in more liberal countries?
Yeah, I would say definitely in urban centres and left-leaning or academic intellectual circles, at the risk of sounding like the ‘liberal coastal elite’. But if our current political climate shows you anything, both here in America with Trump and also in the UK with the nationalism and isolationism that’s been sweeping since Brexit, it feels like on the one hand yes we are more accepting and we’ve progressed further than we have in history, but on the other hand the pendulum seems to be swinging so aggressively in the other direction in response to that, creating this chasm between the two sides. So I don’t feel comfortable saying we’ve reached a place of acceptance full stop, but I think that we see the importance now of showing our acceptance. I think also in the past couple of years, we’ve seen that switch from tolerance to acceptance. 10 years ago it was all about tolerating people’s differences or tolerating things you don’t understand, but of course if you unpack that word there’s an inherent judgement in it – you’re tolerating something that is not okay. So I think once we make that switch from tolerance to acceptance, which I think we’re in the process of doing, that is when these doors are going to open up. Obviously Simon found his guy at the end of the film, but do you ever think about whether Ethan will get his happy ending?
I do think about it a lot, because that’s the other thing that I’ve found in my experience as a gay black man, is that a lot of people find me funny and entertaining, in a lot of the same ways that they gravitate towards Ethan – his quick-witted, sharp-tongued, brilliant mind. But I don’t really feel sexualised in the way that some of my other gay friends are, and I think a lot of that has to do with the femmephobia that we were talking about, but also we just haven’t really seen those stories told. I haven’t heard anything about what happens for Ethan next, but I would like to think he finds love. I mean, I think it’s hard for anyone in high school to find love – definitely not one that lasts – but I like to think that he goes off to Dartmouth or Harvard or Stanford, and finds the Barack to his Michelle.

Maybe Ethan could get his own spin-off movie?
I would love that! That would be a dream come true. There’s so much to explore in that world, for sure.

If there were a sequel in the future, would that be something you’d be down for?
Yeah, absolutely, I would be more than happy to go back to Creekwood, especially signing up to go back with all the people I worked with. Nick is such an amazing force, he’s such a talented actor. When we talk about straight actors playing gay roles, or white actors getting these parts when people of colour were auditioning as well, in theory you sort of want it to look a certain way or happen a certain way, but then I work with Nick and I look at his performance and I’m like, ‘I can’t imagine anyone else playing Simon’. He is the best fit for the role, and he’s so incredibly talented and emotionally involved – anyway, I’ve gone off on a tangent about how much I like Nick Robinson, but he’s just such a likeable guy!

What impact do you hope Love, Simon will have on young LGBTQ people?
Well, if this past year of filmmaking has shown us anything, it’s that representation is really important, and arguably the most important thing when cultivating a new generation of storytellers. I think the fact that I’m in this film, and that there are young gay black boys who are going to see someone who looks like them – even if just a little bit – then that makes me so excited and ready for all of the projects and stories that are going to come rolling down the pipeline having inspired all those kids. That’s my hope.

Love, Simon is out in US cinemas now and will be released in UK cinemas on 6 April.