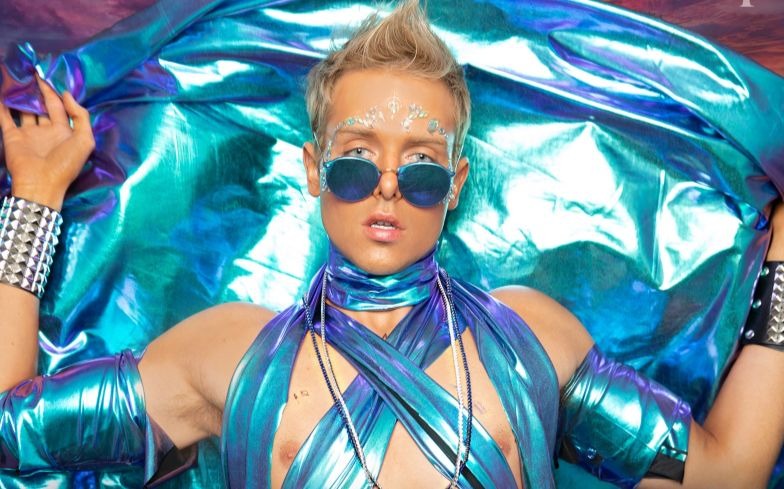 Brazilian-born queer singer Lord F has been recording several singles over the past few months, alongside frequent collaborators and producers Clio Wilde, LAMPS and Josh Lynch.

But his latest single, Platinum, celebrates queer love and is performed with the non-binary drag king Chanel & The Circus. Lord F describes the romantic, upbeat, dance-bop single as about “a love that is like a precious stone, even when it’s that rare it needs to be worked on, polished and taken care of so it can shine bright.”

Speaking to GAY TIMES, Lord F confirmed that the song was based off of a “real love story.”

Reflecting on the importance of celebrating queer love, especially with Brazil having the openly homophobic president Jair Bolsonaro, he said: “There is a very big and colorful gay scene happening in Brazil that needs to be acknowledged not only for the bad presidential news.

“I want us to celebrate the gay life in Brazil and let people know that as disappointing as it is to have such hate speech, not only from the president but from many people in the country that share the same vision.

“Let’s be loud and proud, and fight back, imposing ourselves and our culture! They are not strong and definitely not smarter than us.”

Chanel & The Circus praised the beauty of the song, saying: “It’s okay to realize love might not last forever but it’s beautiful in the moment and that’s what we have to celebrate.”

They added that whenever the song is performed live, the crowd was always dancing.

Lord F clarified that there wouldn’t be a music video for the single, but sharing his vision for what it would be, he said he “envisioned it with a 80’s American diner vibe, traveling back and forth in time since the song talks about a couple that got reunited after a while and is willing to see what’s left there in that love situation.”