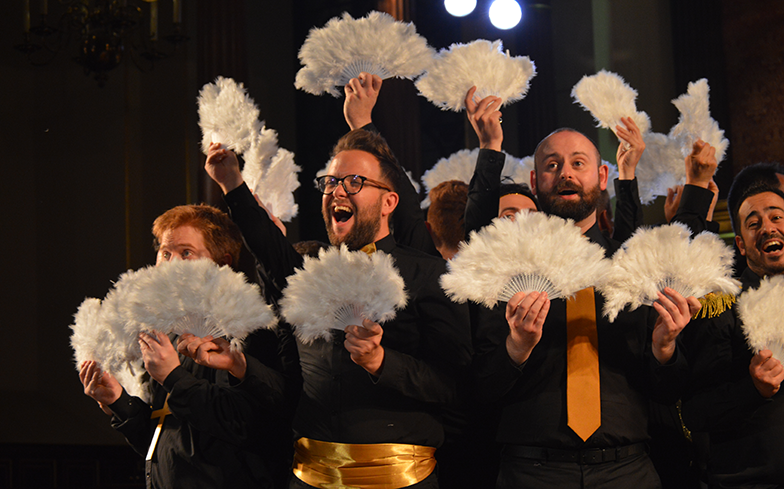 The boys are performing their travel-themed show Wish You Were Queer! in their hometown for three shows in March.

Fed up with the dreary cold mornings? Fancy escaping the 9-5? The summer holidays may be closer than you think as the London Gay Men’s Chorus Ensemble bring their new show to Mountview for three shows next month. Join them as they set off on the trip of a lifetime, taking their audience on an exciting journey through song.

Featuring old favourites and contemporary pop bops, they will chronicle the highs and lows of the summer holidays. Prepare to be entertained by their signature sound, original ‘choral-ography’ and harmonies as sizzling as the summer heat! Catch the show in London before it transfers to the Prague Fringe 2020 festival in May.

The London Gay Men’s Chorus has a busy year lined up, with shows at the Union Chapel and the Hackney Empire, and an appearance confirmed at the Mighty Hoopla festival. The smaller Ensemble group – who will be performing Wish You Were Queer! – is a 20-strong group of auditioned singers drawn from the main chorus. They first started rehearsing in 2005 and will be celebrating their 15th anniversary with this brand-new show.

Their previous programme, Songs of Gays, was a runaway success. After debuting in London, the boys took it to the Prague Fringe in the spring of 2018, then performed it twice at the Camden Fringe festival that summer. They ended the year with 10 shows at the Garrick Theatre, opening for Katherine Ryan for her Glitter Room residency in the West End.

The Ensemble boys are regulars on London’s entertainment scene – just last week they were serenading the stars of television and radio at the annual Radio Times Covers party in Knightsbridge. They’re also known for a number of high-profile TV appearances including recent performances on The One Show and The Great British Bake Off.

Wish You Were Queer! will play at Mountview on 7th and 8th March 2020. Tickets and information can be found here.