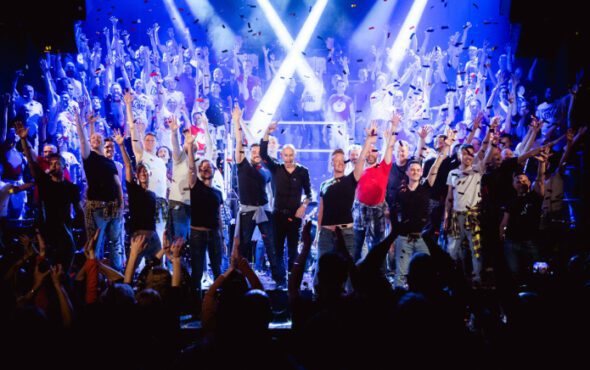 We last caught up with the London Gay Men’s Chorus as they were preparing for their Big Birthday Bash concerts at The Clapham Grand last December, to mark their 30th anniversary.

The Chorus boys are continuing to celebrate their milestone birthday with a year-long programme of events, the next of which is rapidly approaching. On 29th and 30th April they will be staging tribute concerts to gay composer and Broadway legend Stephen Sondheim, who passed away at the end of last year.

The shows – titled Sondheim Songtime – promise to be a spectacle, with songs drawn from the prolific writer’s impressive back catalogue of hit musicals – think West Side Story, Merrily We Roll Along, Company, Follies, and more besides. The Chorus will also be shining a spotlight on some of his lesser-know work – including Anyone Can Whistle (a show which will be revived at the Southwark Playhouse soon), Passion, and Evening Primrose.

Stephen Sondheim was a titan of musical theatre. Many of Broadway’s best known and popular songs are a result of his creative output and this show is a timely celebration of his work across the decades. Thought-provoking yet entertaining, his genius was both as a composer and lyricist, using both these talents to leave a legacy of remarkable variety, recognised by critics, performers and theatre-goers in equal measure.

The London Gay Men’s Chorus will undoubtedly bring their unique choral arrangements and fabulous choreography to the stage at London’s Cadogan Hall, breathing new life into the material and reimagining the songs in fun and exciting ways. You won’t want to miss this one!

Tickets for Sondheim Songtime, from £20, are on sale now. More information can be found here.