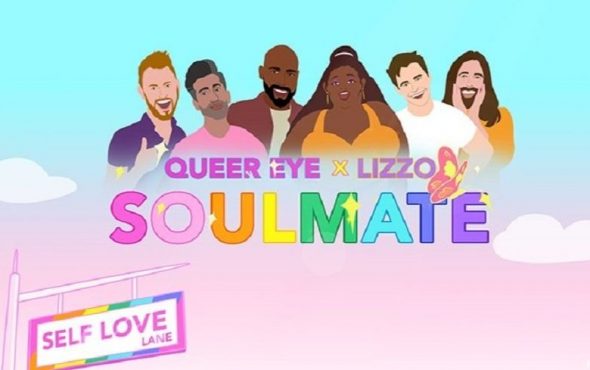 Lizzo has finally released a music video for Soulmate.

Pride Month may be coming to an end, but Lizzo has dropped a great surprise for her LGBTQ+ fans, a music video for her self-empowerment anthem, Soulmate, from her most recent studio album, Cuz I Love You.

And it’s not just Lizzo starring in the upbeat lyric video for the song, as she’s recruited the best self-love gurus out there, the whole Queer Eye gang, to join her in the music video as well.

During the video, Lizzo dances in neon lighting with Karamo, has a picnic with Bobby, her own fashion shoot with Tan, dances with Antoni and an army of corgis and finally dances with Jonathan in both of their luscious locks.

In an Instagram post, Queer Eye wrote: “We’ve kept this secret for FAR TOO LONG. The Fab 5 + @lizzobeeating, our self-care queen, collabed on the hottest project you never knew you needed. The ‘Soulmate’ Lyric Video is out now on YouTube. Make sure you love yourself by watching RIGHT NOW.”

The music video has received a lot of praise, garnering over 51,000 likes on YouTube in just two days. One fan who loved the song wrote: “Lizzo is amazing. She makes everyone get out of sad situations and just helps everyone from her own perspective and problems. A real queen.”

Another praised the music video’s art style, writing: “Ain’t no one gonna mention the different art styles they had and how talented the artist(s) was/were to capture such essence oof. I LOVE THIS.”

And a third looked forward to the future, adding: “Mark your calendars. 2021: We blast this at EVERY Pride parade.”

You can watch the upbeat, colourful video below, or by following this link.

The fifth season of Queer Eye was released earlier this month on Netflix. This series, the Fab Five take their message of self-love and inclusivity to Philadelphia, Pennsylvania.

And the quintet tackle a whole new roster of heroes including a new mother, a priest struggling with his sexuality and a father who wants to impress his daughter with a speech at her wedding.

Netflix has renewed the beloved series for a sixth run, which will see the five travel to their homebase in Austin, Texas to “scour the prairie in a search for a whole new roster of heroes in need of a little TLC.”

Related: Harry Styles joined Lizzo on stage for a surprise performance of Juice