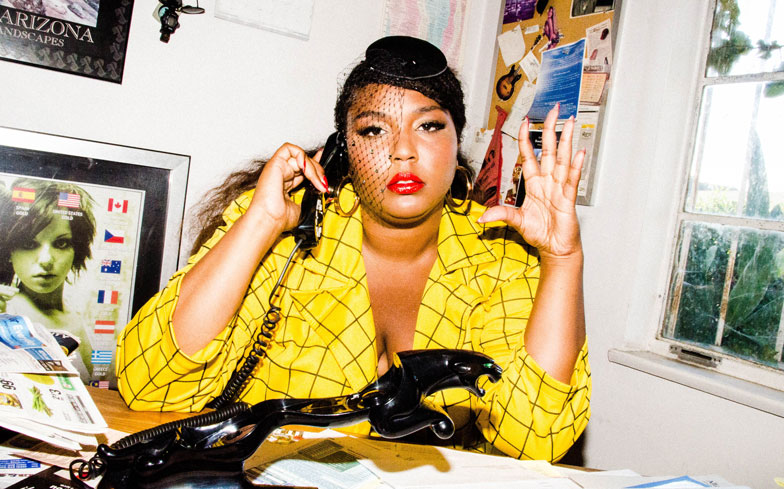 Talking to Lizzo is like chatting to an old friend. Enjoying every giggle, our interview time with the singer went from nothing to something faster than you can scream your favourite line from her latest pop hit, Boys. And for the record, you know the gay boys line is the one that gets us going.

But while she’s pure lol throughout, being on the cover of Gay Times carries a great wealth of importance in the next step of her life. Women of colour being represented on a historically gay men’s magazine is important – as she states during one of the more tender moments of our frankly hilarious time together.

“It means so much because the LGBTQ community has embraced me as one of their own,” she begins. “I felt like an ‘other’ for a very long time. I used to get teased for being gay because I was very curious and I would look at the girls’ makeup around me. I remember being like, ‘I don’t care what people think about me’. I was a bookworm, I liked anime, I dressed weird, I was in a band. Nobody liked me, and I just remember feeling so unwanted and unchosen, and I remember at one time feeling like I was asexual, because no one loved me, and I was so confused about myself and my identity for a long, long time.”

Pausing, she continues: “Being on the cover shows more than just inclusivity, it shows ally-ship, and it shows us kicking these boxes out of identity, and just existing beautifully and
celebrating those differences while living in harmony.”

In reality, it’s us that should be thanking Lizzo. The rising star of the pop world, who’s delivered once again another banger with her single of the summer, Boys – yes, we just mentioned it again we’re that obsessed – has helped put plus-size women of colour on the map,  in a fierce and authentic manner. And a big part of that is down to her IDGAF attitude.

“A lot of people will say to me, ‘I’d never be able to wear that, or say that, or talk to that person, how do you do it?’ And I’m like, ‘Well, you need a confidence boost’, because we’re taught to hide that part of ourselves, and hide our sexuality, and hide our bodies. We’re taught to not talk about what we like. I think that I just had a confidence boost from somebody, from my friends, and then I hyped myself up and I was like, ‘Yeah, I can do this’. When I started doing it, I realised so many people needed to see and hear these things from someone like me. Now, it feels like I’m liberating people when I do it, and that’s also such a liberating feeling for me. It just felt right, it was a very natural progression for me.”

But how important are both solidarity and individuality in 2018? For Lizzo, it’s everything.

“​I feel like the system was created and the media was designed to divide and conquer us and separate us and create too many boxes that everyone felt like they needed to fit into,” she starts. “Lately I’ve been all about erasing those boxes, just kicking them all out. Like, even with heterosexual monogamy, look at those two boxes that the whole of humankind has been forced to fit inside by mainstream media. Getting rid of those two boxes would be incredible. I think the more that we understand each other, the easier it is to stick together, and I think a lot of the misunderstandings make it hard.” Lizzo pays note to the boys of Netflix phenomenon Queer Eye for being vulnerable enough to admit their understanding has holes, and being willing to change that.

“I was just watching Queer Eye, it was the episode where Tan didn’t quite understand the trans community, he just didn’t get it, and I was like, ‘Oh?’ But then he spent a week with a person who’s trans, and now he understands their story. So I think understanding is the first step to gaining solidarity, and then maintaining solidarity.”

Getting rightfully frustrated that queer erasure is “extremely common” in mainstream media, it’s no surprise then that latest phenomenon Pose has caught her eye for ensuring the community is seen and hopefully heard. Enter Lizzo’s queer hero of 2018: Janet Mock.

“After meeting her and seeing what she’s accomplished this year alone, I’m extremely inspired by her,” we learn with great joy. “Directing for the first time, and doing all the things that I aspire to do, and doing it as a trans woman I think is incredible, because honestly in this industry they feel unwanted. I’m a big black girl, and I feel unwanted in this space too. So I feel like to be able to do that and to be successful at it, and let everyone know who’s watching, ‘Actually, not only am I doing this, but it’s good, and you like it’, I think is a huge statement. So yeah, Janet is someone I look at and say, ‘That’s gonna be my 2019’.”

Related: GIRLI is the feminist pansexual pop star you need to stan

With minority stories thankfully on the rise, and the likes of Janet Mock and other trailblazing queer figureheads to thank for such achievements, talk turns to the reality of day-to-day homophobia, and in particular the restrictions of the music world.

“It definitely exists, and I think that it’s worse for people who identify as male. I think the stigma is higher on that side, and I think it’s because the insecurity is higher from the people that it seemingly offends,” Lizzo tells us. “With people who identify as women, I think sexuality is seen differently in the industry, because the industry is so male-dominated. I think that’s a major double-standard, and I honestly don’t even… I would like to provide a solution, but with this it’s so new and fresh and it’s still happening that I feel like it’s just gonna take more people being honest about themselves, and true to themselves, and open as themselves to eliminate all of these stigmas and pressures to be someone you’re not.” But Lizzo’s daily battles are fought on an entirely different battlefield, revealing that her size is pretty high on the list of things that detractors attempt to use to bring her down.

“It’s definitely size, in the industry at least,” she reveals with great dismay. “The industry I’m in is very vain, and it’s very image-based, and I think that when you commercialise things you bleach it and put plastic on it, but that plastic is also a spanx, and that spanx shrinks you down to a size four, and I think that it was really hard to fit inside that plastic mould for a lot of girls, because before the internet came around, the industry didn’t allow anything to bypass what their image of beauty was.

“Back when I was ashamed of [my size], I’d be like, ‘Well of course, it’s because I’m not small enough’, but now that I’m proud of my size. I’m like, ‘Nah, you need to change your size, you need to put me on the cover of your magazine’. Vogue had me on their Instagram, and there were so many people going, ‘How dare they promote fat people, don’t start making fat common’, and I was like, ‘Too late, this is the most common body in the world, this is the average size of a woman, what are you talking about?’ So I can see it all happening, and it’s definitely size.

When black women can fit into a certain mould, we can get into the industry. It’s hard, because they pit us against each other and create a lot of obstacles, but if you can get through those, you’re good. But my size is definitely something I’ve become real woke too. Like, ‘Oh, my size makes you uncomfortable? Well let me just sit on your face’.”

Related: Dizzy Fae on being a liberated queer woman of colour in the music industry

With us deep in conversation and Lizzo feeling ever-more like a friend, we try our luck as she (politely) dodges our continuing mention of new music and a new album. Fuck it, we ask her straight up – when is the new album coming and who does she want to work with? Brace yourselves, hunties.

“Okay, if I’m gonna give someone the T, I’ll give you guys the T,” she teases. “Missy Elliott is at the top of my list, but I already got to work with her. It was so amazing. I had several sessions with her, and honestly the first time I was shaking on the inside, and I was like, ‘Is this really happening?’ It felt like an out-of-body experience. I still can’t believe it. I’m shook, and I’m blessed, and I learned a lot from her.”

But was Missy evvvverything we’d hope for? Well, of course she was. “She gave me some amazing advice, she told me to take my time – that was last year, and I still haven’t turned my album in, so clearly I took her advice,” Lizzo laughs. “Just to be in her presence and watch her work her magic, when she got into the engineering and producing I was like, ‘Oh my God!’”

Is this a new album we hear creeping up on us secretly then? Hesitating, Lizzo replies: “There is a very high chance that you will be hearing this new music very soon, yes.” #Gagged. With us both a little shook that actual Missy Elliott is about to serve us some serious black girl magic with Lizzo, the clock ticking and the T well and truly spilt, we had one final major thing to ask Lizzo about… Drag Race.

“Me and RuPaul were kind of matching on the show; we were very cute, we totally coordinated,” she smiles as we gag that she’s seen actual RuPaul in full drag, and popped her feet behind the illustrious Drag Race judges desk, too! “Ru famously never turns his head, because he’s got his camera line and he just focuses on that, and that beat is just so perfect I wouldn’t turn my head either, but Ru turned his head and looked at me and said, ‘You got this kid’, and I was like, ‘Oh my God!’ My toes went numb – and not just because those heels hurt.”

The bottom two, Kameron and Monét, even tore up the stage to her track Good as Hell in a lip sync for your life: “That was so surreal! For me, as a person who has been making music, to be a judge and have them lip sync to my song, that was like an extra bonus. I was like, ‘What did I do to deserve this!?’ They were just going for it, and I was living for it.”

And it seems the the queens even had an impact on her day-to-day fasHUN, too: “After being on Drag Race, I wanted to be beat and snatched every day,” she giggles. “Like, I used to do my own makeup and stuff, but now I’m like, ‘Listen honey, if I can, call up the team to get me beat and snatched, because there is a standard! When you’re amongst queens, you have to be a queen.’”

From here forward, it’s the only way our new qween of pop should exist – snatched and beat. Every. Single. Day.

More information on Lizzo can be found here.