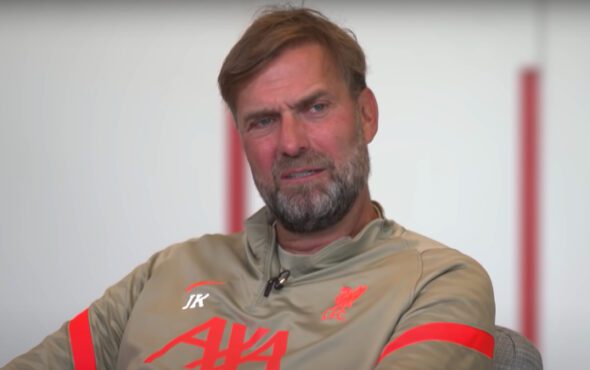 Liverpool FC manager Jürgen Klopp has condemned fans for their homophobic chants and behaviour towards players in a new interview.

During a sit down with Kop Outs! founder Paul Amann, Klopp open up about the homophobic chants that were spewed at Chelsea loanee Billy Gilmour.

“I never understand why you would sing a song if it was against something in a football stadium,” he said.

“I never got that. I never liked it. In our case, we have probably the best songbook in the world. It’s easy to decide not to sing the song anymore.

“So, we can decide now, this is not our song anymore. I’m not sure if people listen to me but it would be nice. I don’t want to hear it anymore for so many reasons.”

On Friday (13 August) after Liverpool’s win against Norwich City, fans were caught chanting “rent boy” at Gilmour. The long-running offensive term has often been used in the past towards Chelsea and their players.

Klopp went on to say that songs that don’t motivate and push players are a “waste of time.”

“When they start singing ‘Bobby Firmino’, ‘Mo Salah’, ‘You’ll Never Walk Alone’ this kind of stuff, that gives you goosebumps and a push,” he explained. “The other songs are completely a waste of time and if you think what you sing, you are an idiot.”

Great work from @LFC_LGBT and @LFC here, addressing important issues in the game. Give it a watch 👇🏽 https://t.co/hGtaQstFxD

Kop Outs! was the first LGBTQ+ organization to tweet out about the demeaning incident.

“Great result today marred by homophobic chanting by some of our fans targeting Chelsea loanee Billy Gilmour. If you can’t support without resorting to bigoted nonsense, you don’t understand YNWA,” they tweeted.

Liverpool FC wasted no time in backing Kop Outs! and quote-tweeted the organization while urging fans not to use the homophobic term.

“The chant is offensive and inappropriate – a message we have repeatedly communicated alongside KOP Outs,” they wrote. “We urge supporters to remember the inclusive values of the club and to remain from using it in the future.”

Over the years, fans and organizations have urged officials to take action against anti-LGBTQ+ abuse.

He added that although stewards knew how to confront racism, there was a “grey area” surrounding homophobia, and that lifetimes bans for homophobic fans “don’t necessarily have to be the only answer” and that punishment should be given to change behaviour.