Little Women: The Musical is a charming, if very safe, night out – review 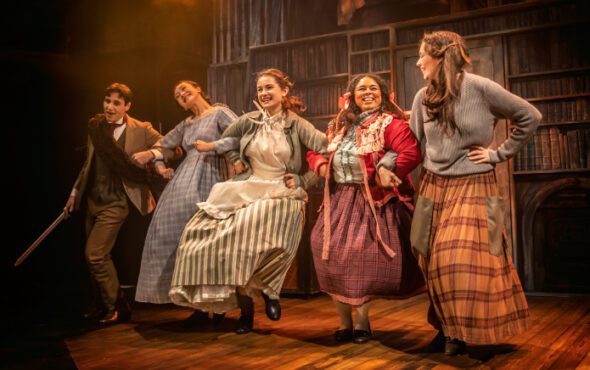 This musical re-imagination of the classic novel by Louisa May Alcott has made its London debut at the Park Theatre in a production directed by Bronagh Lagan.

Back in 1868 Little Women was undoubtedly a groundbreaking piece of work – showcasing the lives of strong independent women setting out in a world without the help of a man (it’s set during the American civil war, while the father of the family is absent). We’re introduced to the four March sisters and their mother, and in particular we follow the story of Jo March – played brilliantly here by Lydia White – a feisty, intelligent young woman who doesn’t want to marry and aspires to be a successful writer.

Society has moved on substantially since the source material for this was written, and musical theatre is now currently full of stories depicting female empowerment – SIX and Wicked both spring to mind as showcasing strong women as their protagonists. While Little Women has a good deal of warmth and charm, it all feels very safe when compared to these sorts of shows.

That’s not to say it doesn’t make for an enjoyable night out. There’s plenty here that we liked – the music is really rather charming, with the piano-and-strings live band lending proceedings a warm, borderline folky feel. There are some genuinely impressive performances from the cast too – alongside Lydia White we also thought that Savannah Stevenson as Marmee and Bernadine Pritchett as Aunt March were excellent (the latter hitting some impressive and surprisingly low notes in her solo number).

However, we felt that everything was just a bit too nice. There’s really very little in the way of dramatic tension, there are no villains, the jokes are gentle, everyone seems to like each other just a bit too much. It all feels slightly twee and there’s little tonal variety throughout. It doesn’t help that the musical is very long, clocking in at comfortably over two and a half hours – to justify that sort of length and keep us engaged we need a bit of drama, we need to be taken on a journey, and Little Women: The Musical doesn’t deliver on that front. It’s perfectly pleasant with some nice songs and solid performances, but don’t expect to be wowed.