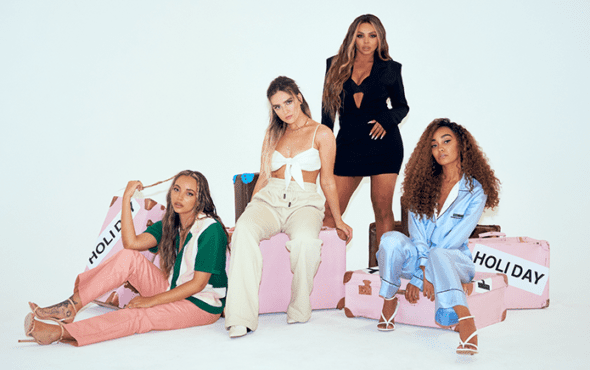 Little Mix are taking fans on a “much needed getaway” with their incredible new single.

Co-written by Jade Thirwall, Perrie Edwards and Leigh-Anne Pinnock with their longtime collaborator Kamille and Swedish duo Goldfingers, Holiday is a stripped back pop anthem with an electro-pulsating bass line.

Holiday is the group’s second single of 2020 after Break Up Song, which became their historic 15th top ten hit in the UK. Both songs are expected to be included on their upcoming sixth studio album, details of which are yet to be announced.

When we spoke to Jade earlier this year, she told us that Little Mix haven’t “over-thought” their new era and are releasing music that “feels good” to them, instead of chasing trends.

“It’s very much been, ‘OK, this is an amazing song – it’s going on the album.’ That has lifted a weight off our shoulders really,” she explained. “It was quite a stressful process for LM5 and the change of labels and everything. For this, we were very much left to have fun and get back to what we really love about being Little Mix.”

She added: “That’s not to say we didn’t love LM5 because we wrote so much of that album and we put so much into it. That whole era was very much about what we stood for; female empowerment, women’s rights and it was very topical in that moment. It’s something we are very passionate about.

“We really did get that message across. But we’ve done that now, so now it’s time to let our hair down a bit and have some fun.”

Holiday is now available on streaming services – listen here on Apple Music or watch the lyric video below.