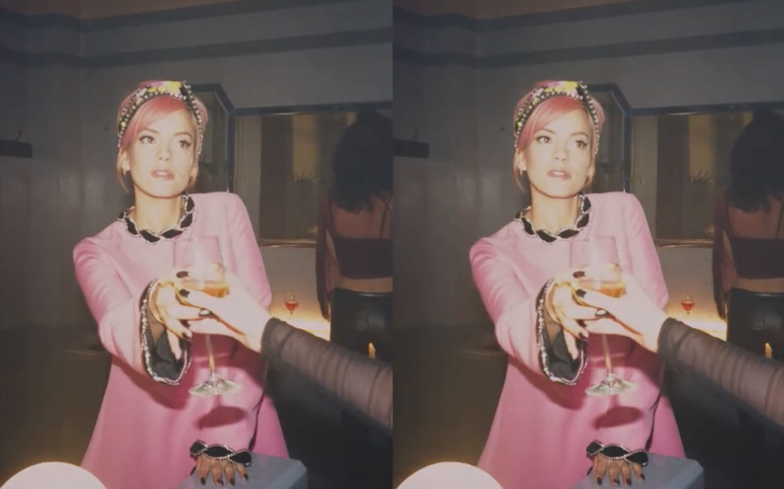 Trigger Bang is a nostalgic, mellow pop/hip-hop number, seeing Allen reference her childhood, substance abuse, and reminisce on the days she was “playing with rude boys and trainers”.

In the video, the Not Fair singer – serving pink bombshell, might we add – and Giggs flashback to their younger selves, with references to previous videos such as LDN and 22.

The clip concludes with the pair having a night-time cuppa in a café – very British. Watch below.

Lily’s last studio album – 2014’s Sheezus – debuted at the top of the UK albums chart, and spawned three top ten singles, including her huge number one cover of Keane’s Somewhere Only We Know.

Her next studio album – titled No Shame – is expected to be released this summer.

Last year, during a podcast with Jolyon Rubinstein and Heydon Prowse, she reflected on her experiences since her last album, including her divorce from Sam Cooper.

She said: “Weirdly this album is quite insular. Mainly it has to do with me and my relationship with my children, the breakdown of my marriage, substance abuse etc.”

Never one to shy away from politics, Lily also confirmed there are “a few songs” that touch on the political issues that have recently dominated her Twitter.

The Brit made headlines last January when she released a cover of Rufus Wainwright’s Going To A Town with an accompanying anti-Trump video, filmed at the Women’s March in London.

Lily has always been outspoken in her music when it comes to social issues – most notably on her 2009 single Fuck You – and has voiced support for the LGBTQ community in the past, so we look forward to hear what she has in store this time around.

Trigger Bang is now available on iTunes and streaming services.