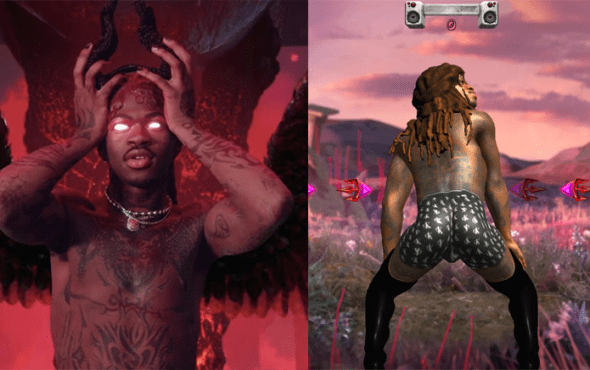 Lil Nas X has broken the internet once again and this time it’s with a chaotic twerking game called Twerk Hero.

If you haven’t noticed already, Lil Nas X isn’t dropping the quicky Hell theme just yet. In his latest move, the record-breaking singer has released a video game where you can score points by twerking.

Lil Nas X is making the most from the hype surrounding MONTERO (Call Me By Your Name) and this game is another way to crack into the industry.

The infamous music video the game is based on went viral on release day (March 26) for its iconic stripper pole, satanic imagery, and Lil Nas X’s incredible thigh high boots.

Not only is the track an absolute bop, it hears Lil Nas X stand in the full power of his sexuality as a queer man, chronicling his personal journey through judgement, temptation and acceptance.

Seeking inspiration from the much talked about music video, the game requires you to twerk to gain points and your overall rating depends on how many successful swipes you can make.

If you’ve got good rhythm, a steady hand and love for Lil Nas X, then you can make your way through this free-to-play browser game and reach the end where, you too, can dance on Satan’s lap. If you don’t believe me, check out the clip below:

MY NEW GAME “TWERK HERO” IS OUT NOW! CAN U MAKE IT THROUGH ALL LEVELS?! pic.twitter.com/Juhr1jiZx4

While we’re celebrating all things Lil Nas X, why not check out his viral music video for MONTERO (Call Me By Your Name).

It’s a blockbuster of a music video that challenges the status quo, is powerful in its queerness, and unapologetic with its message.

“The story opens in a lush Garden of Eden where Nas first introduces the theme of duality, which is displayed throughout the video,” an official description from his record label reads.

“He plays the role of Adam as well as the snake that tempts him into giving in to the carnal desires he was forbidden to explore, and we see the two merge and become one. Following a nod to Plato’s Symposium displayed on the tree of life, a shackled up Nas finds himself at his execution day in the Colosseum, where he is surrounded by and receiving judgement from various versions of himself.

“Once he has been executed, he ascends to heaven only to be pulled down to hell where he harnesses his sexuality to seduce the devil and strip him of his power as an evil force—and dismantling the throne of judgement and punishment that has kept many of us from embracing our true selves out of fear.”

Lil Nas X co-directed the visual with Tanu Muino. It was produced by UnderWonder Content with visual effects by Mathematic.