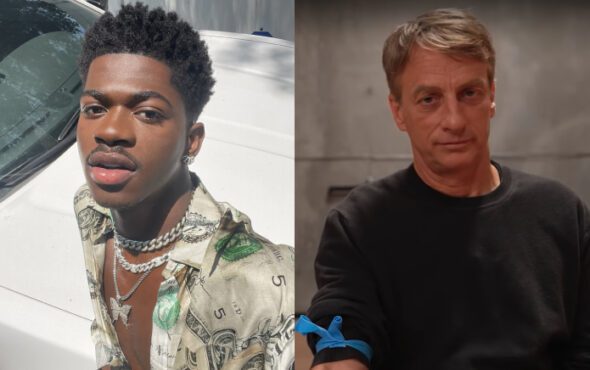 Earlier this week, the acclaimed skateboarder announced his brand new collaboration with Liquid Death for his new batch of blood skateboards.

In an Instagram video, Hawk is seen giving two vials of his blood which are then added to a container of red paint.

“They’re gonna mix my blood into the paint and do a limited run of skateboards using my real blood in the graphics,” Hawk explained.

Since the announcement, the 53-year-old received very little pushback for his product, instead, the news was praised by fans and sold out shortly after going on sale.

But unlike Hawk, Lil Nas X faced massive backlash for his own blood-infused merchandise earlier this year.

The Industry Baby rapper pointed out the double standard in a tweet on Wednesday (August 25).

“Now that Tony Hawk has released skateboards with his blood painted on them, and there was no public outrage, are y’all ready to admit y’all were never actually upset over the blood in the shoes? And maybe [you] were mad for some other reason?” he wrote.

now that tony hawk has released skateboards with his blood painted on them, and there was no public outrage, are y’all ready to admit y’all were never actually upset over the blood in the shoes? and maybe u were mad for some other reason?

LNX also took to the skateboarder’s comment section and coined the phrase “Nah he tweakin” which spread like wildfire all over social media.

Back in March, the Old Town Road rapper faced controversy when he announced a collaboration with MSCHF for his “Satan Shoes” – which included a drop of human blood.

The limited-edition Nike Air Max 97s – which were announced after the release of his hit single Montero (Call Me By Your Name) – reportedly sold out in a minute after it was announced.

But even with its success amongst consumers and fans, the release faced immediate backlash and resulted in Nike suing MSCHF for trademark infringement.

The two companies reached a settlement in which MSCHF issued a voluntary recall and offered full refunds to customers who bought the shoes.

One Twitter user wrote: “Wait a damn minute, so when Lil Nas X put a drop of “blood” in the bottom of a shoe, it was the worst thing possible but Tony Hawk is selling skateboards with a vial of his own actual blook in each paint job that’s okay. Why am I not shocked.”

Another user said: “I don’t hate Tony Hawk but the fact [Lil Nas X] was condemned for putting a drop of blood in a shoe and Hawk is being praised for putting it on a board stinks of privilege.”

Aside from his shoe controversy, LNX has had quite the year so far with his iconic singles and music video releases.

On Thursday, the rapper continued his upward trajectory with a new promo video for his highly- anticipated debut studio album Montero.

The record is set to be released on 17 September.

Check out the full video announcement below or here.