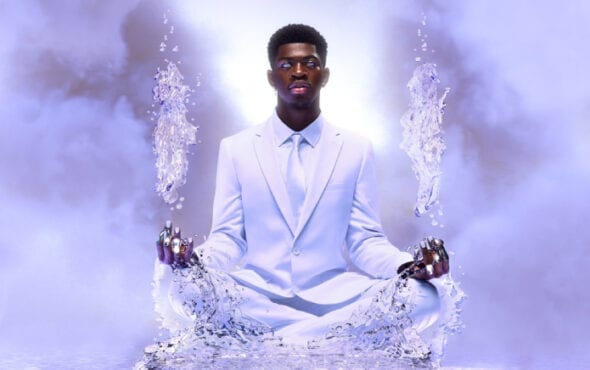 Lil Nas X clearly has zero respect for our respiratory systems because he is not letting us BREATHE.

This week, the chart-topping rapper and social media mogul announced the release of his brand new single, Sun Goes Down, with the artwork depicting him as an Iceman-esque figure as he manipulates water and ice.

Sun Goes Down follows in the footsteps of Lil Nas X’s electro-rap anthem MONTERO (Call Me By Your Name), which proved to be completely unproblematic amongst right-wing conservatives and everyone loved it and that’s the end of that story.

The track debuted at number one on the Billboard Hot 100, becoming his second song to reach the pole position in the United States after Old Town Road, which made history as the longest-running number one song on the chart.

MONTERO (Call Me By Your Name) also topped the charts in the UK, Ireland, Canada, France and Australia and reached the top 10 in several other territories.

It was recently announced that Lil Nas X will make his SNL debut as he performs the number one bop, as well as another cut from his upcoming debut album MONTERO, which we can assume is Sun Goes Down.

The long-awaited – we repeat – long-awaited album is expected to be released this summer. MONTERO will also include his Christmas-themed top 40 hit Holiday, which has been certified platinum in the United States.

Sun Goes Down will be released 21 May to coincide with his SNL performance.