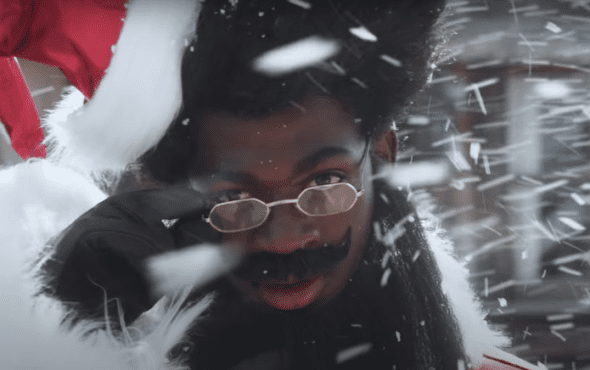 The star announced the release of the track, titled Holiday, with a Back to the Future-inspired teaser. Budget? It’s there.

Broadcast in the US yesterday (8 November) during an NFL game, the clip references Lil Nas X’s record-breaking number one single Old Town Road as he time travels to a Western town on horseback.

After a man in a Father Christmas costume is booted out of a saloon, Lil Nas X transforms into the jolly icon and flies away on a sleigh, which prompts guest star Michael J Fox to say: “Whatever you do Nas, don’t go to 2020.”

It’s unsure whether Holiday will be included on his highly-anticipated debut album, which he teased last month at the Billboard Music Awards.

“I want everybody to be on the lookout next month for Nasvember,” he revealed. “It’s going to go crazy. In 2021, I’m dropping the greatest album of all time.”

The album is expected to include Call Me By Your Name, an upbeat rap anthem that he teased on social media earlier this year, as well as Titanic, One of Me and Don’t Want It.

Lil Nas X has also scored two more major hits on the Billboard Hot 100: Panini, which peaked at number five and has been certified 4x Platinum; and the Cardi B/Nas-assisted country-trap anthem, Rodeo.

Holiday will be released 13 November – watch the teaser below.