7 LGBTQ-inclusive television shows to look forward to this year 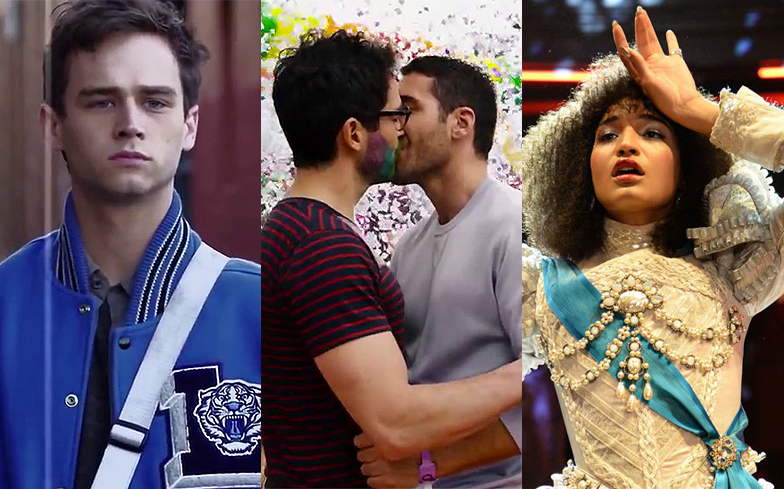 When it comes LGBTQ-inclusive stories being told on television, we’ve had a great start to the year.

We’ve had not one but two seasons of Drag Race, Netflix’s reboot of Queer Eye has become a cultural force, while The Assassination of Gianni Versace: American Crime Story put the rife homophobia that existed in the 90s under the microscope. Moreover, we’ve had queer representation in huge shows like Riverdale, Black Lightning, Crazy Ex-Girlfriend, Grey’s Anatomy, Quantico, Star Trek: Discovery, and Shadow Hunters to name but a few.

But 2018 is far from over, and there are plenty of LGBTQ-inclusive shows coming up that we’re looking forward to. Here are seven to put down on your must-watch list.

13 Reasons Why
Considering the first series of 13 Reasons Why completed the story arc set out by Jay Asher’s novel it was based on, the second run sees the show embark on new ground. Gone are the cassette tapes and in comes a new throwback format to offer up clues: the polaroid.

“Season 2 picks up in the aftermath of Hannah’s death and the start of our characters’ complicated journeys toward healing and recovery,” an official synopsis reads. “Liberty High prepares to go on trial, but someone will stop at nothing to keep the truth surrounding Hannah’s death concealed. A series of ominous polaroids lead Clay and his classmates to uncover a sickening secret and a conspiracy to cover it up.”

All will be revealed when new episodes are added to Netflix on 18 May.

Sense8
After a fan petition gained over 500,000 signatures for a proper goodbye for the show when it was cancelled by Netflix, the unthinkable actually happened. Show creator Lana Wachowski was commissioned to create one last episode to wrap it all up.

“Personal lives are pushed aside as the cluster, their sidekicks, and some unexpected allies band together for a rescue mission and BPO take-down in order to protect the future of all Sensates,” reads the episode’s official synopsis.

You will be able to watch this emotional finale on Netflix on 8 June.

Pose
If having American Horror Story, American Crime Story and Feud all running under his watch wasn’t enough, super producer Ryan Murphy will launch his new series Pose this summer. Set in 1986, it will focus in part on ball culture in the Big Apple. What’s more, the series boasts the largest recurring LGBTQ cast ever for a scripted US TV series.

According to a synopsis, the show “examines the juxtaposition of several segments of life and society in New York City: the emergence of the luxury Trump-era universe, the downtown social and literary scene and the ball culture world”.

Pose will start on FX in the US on 3 June.

A Very English Scandal
The real-life story of Liberal Party leader Jeremy Thorpe has been turned into a three-part BBC One drama. Hugh Grant will star as the politician in A Very English Scandal, in what will be the British actor’s in his first television role in 20 years. The drama follows Thorpe’s desperate bid to keep his secret gay relationship with Norman Scott – played here by Ben Whishaw – a secret during the 1960s.

“As long as his ex-lover Scott is around, Thorpe’s brilliant career is at risk,” a description of the drama reads. “Thorpe schemes and deceives — until he can see only one way to silence Scott for good. The trial of Thorpe changed society forever, illuminating the darkest secrets of the establishment. The Thorpe affair revealed such breath-taking deceit and corruption that, at the time, hardly anyone dared believe it could be true.”

Will & Grace
After an 11-year absence from our television screens, Will & Grace returned last September for a ninth season. All four cast members returned and the general consensus among critics and viewers was that it was a triumphant comeback. We don’t know yet what the 10th season has in store, but we do know it’s coming as Will & Grace was greenlit for a further two years. Expect Will, Grace, Karen and Jack to hit our screens again this September.

Related: 15 of the best LGBTQ anthems that have been released in 2018 so far

American Horror Story
Few details are know about the next season of Ryan Murphy’s hugely popular anthology series, but we do know that it will be set in the near future. The events will take place in October 2019, in fact. The showrunner has promised that the new run will be “fantasy inspired”.

“It’s not necessarily as real and grounded as the past season,” he said. “We’re sort of going back to Asylum and Coven. It’s that tone. That’s the tone of it.” Evan Peters, Sarah Paulson, Billy Eichner, and Cheyenne Jackson will return, while Joan Collins has joined the cast. We’re particularly excited for this one.

Based on previous seasons, we expect American Horror Story to return in September.

Queer Eye
After becoming an unexpected phenomenon back in February, the rebooted Queer Eye will return for more episodes later this year. The Fab Five have already recorded the second season, as they help transform and coach everyday heroes to lead a more confident and fulfilled life. Antoni has already told us to expect more diversity and inclusion in the second run, adding: “I’m always fascinated by people’s heritage and cultural background – especially being raised in Montreal, which is such a multicultural city. I always love to know about those recipes that you had growing up that your grandma made. So I kind of get to explore people’s past, and how they can bring that up. Respecting tradition, and also just learning about it as well. I learned a lot more in season two, than I did in season one. I hope that continues.”

New episodes of Queer Eye will be available to stream on Netflix later this year.