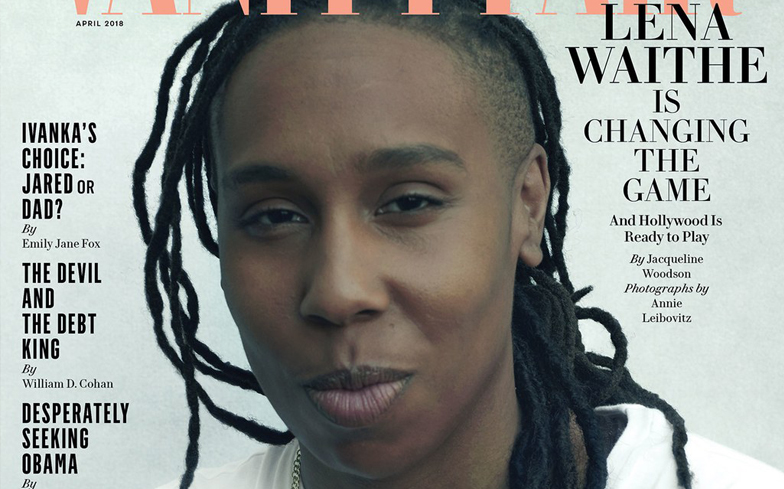 It’s not that often Black lesbians see themselves reflected back in the mainstream but Lena Waithe on the front cover of Vanity Fair has, as the magazine declares, ‘changed the game’.

The impact of this cannot be underestimated. Yes we must continue to challenge these lifestyle magazines whose pages are still predominantly made up of rich, white women, but let’s take a breath and enjoy this beautiful moment where an out and proud Black lesbian with butch swagger is taking up space. Flicking through the ‘women’s magazines’ whilst waiting for your train or flight has been taken to a whole new blacker and queerer level.

Lena Waithe’s cover is one of those watershed moments for queer culture and for queer women of colour in particular. Black lesbians’ lives are invisible. Ask yourself, how many out Black lesbians can you name who have a high public profile like Waithe’s?

Yes, those are crickets you are hearing. Our lives are rarely depicted positively anywhere. At best, when we are not either in prison or dead, our lives are only framed by the oppressions we experience. To be a Black lesbian is to be sad, lonely, unloved and depressed. This is not to deny the reality of many Black lesbian lives, especially in places where are very existence is deemed illegal or “perverted”.

The struggle to survive under the weight of micro-aggressions, invisibility and violence is a conversation we must never let fall away from the table. But, it is also important to remember that our lives are also full of joy, love and happiness.

The intimate pictures of the mundanities of a Black lesbian couple’s domestic life, making breakfast or cuddling on the sofa, within the context of a racist and homophobic society that seeks to erase us, are affirmations of resistance. It’s this message that emanates from Waithe’s front cover and interview that keep people going when they feel they cannot. That you can be who you are and things will ‘be okay’. This is what shifts this moment from being just another way to grab headlines into something that is moving and powerful.

When it comes to causing a stir, comparisons can be made to the now iconic KD Lang and Cindy Crawford Vanity Fair cover in 1993, which ignited the burgeoning flame of recognition in many young lesbian minds.

With a breakout TV series, a historic Emmy, and a propulsive role in Steven Spielberg's #ReadyPlayerOne, screenwriter-producer-actress @LenaWaithe is re-writing the rules for the next generation. Read the full cover story at the link in bio. Photograph by Annie Leibovitz. #VFxLena

However, as important and groundbreaking as that cover was there’s no need anymore to have a supermodel in the frame to justify the presence of a visibly queer person. This is all about Lena, she is staring right at us with a coy smile that says ‘this is my time now’ and nothing will be the same after this.

Those who paved the way for us all in the LGBTQ community like Storme Delarverie, a Butch lesbian of colour whose physical resistance against arrest sparked the Stonewall riots of 1969, would be proud.

It is because of her and Black women like her that Lena Waithe can step into her own glory, be powerful, strong, politically outspoken and let’s face it damn hot all at the same time and grace the cover of one of the most iconic magazines in the world.

A million and more flames have been lit, and I look forward to seeing them burn brightly.

Chardine Taylor-Stone is an award-winning cultural producer, writer and educator. She is currently the Inclusion and Education Officer for UK Black Pride.