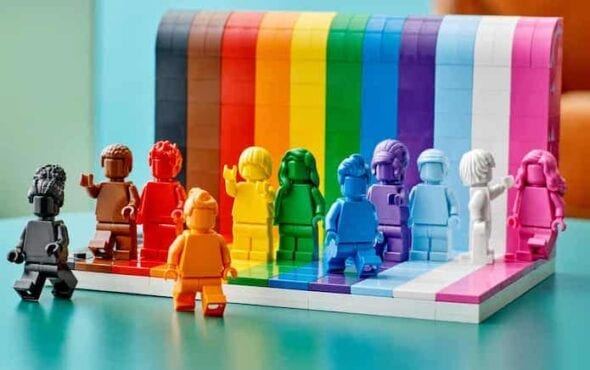 The new Lego collection has been created with no specific gender identity to express “individuality”.

Lego’s new exciting set will include 11 unique figures of varying colours to represent the rainbow and LGBTQ+ Pride flag.

Matthew Ashton, the vice president of design at the Lego Group, spoke to The Guardian about the Lego LGBT+ set he created.

Ashton first created the set at the Lego offices, at his desk, to create a space that “reflected me and the LGBTQIA+ community I’m so proud to be a part of”.

The designer explains how his experiences as a childhood shaped his approach to creating an inclusive project.

“Trying to be someone I wasn’t was exhausting. I wish, as a kid, I had looked at the world and thought: ‘This is going to be OK, there’s a place for me’. I wish I’d seen an inclusive statement that said ‘everyone is awesome’.”

Lego shared the news of their new set, Everyone is Awesome, on social media to “celebrate every Lego builder”.

We’re super excited to reveal our new set – LEGO Everyone is Awesome! Because we celebrate every LEGO builder ❤️🌈 #LEGO #EveryoneIsAwesome pic.twitter.com/J7KSz3zWik

The playful Lego set includes 11 colours, a rainbow arch and a mixture of genderless figures. If you’re looking to get your hands on a set then mark your calendar for Pride Month.

Lego will be releasing the Pride-inspired set at the start of June and it will be available on LEGO.com and at LEGO brand stores for an estimated retail price of £30.99.