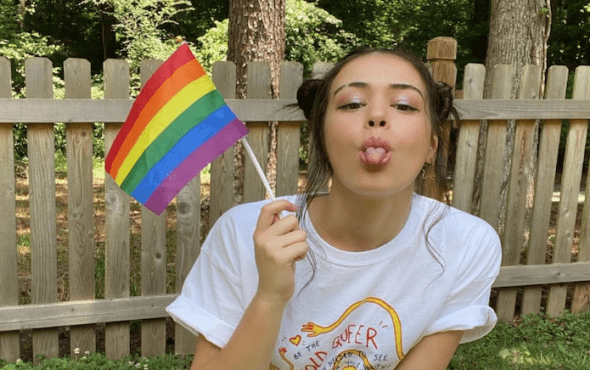 American actress Kaylee Bryant has come out as queer in honour of Pride Month.

Pride Month is a time of amplified acceptance and solidarity with the queer community across the globe.

As Pride Month rolls out, we’ve seen stars a new wave of stars coming out and disclosing their sexuality in support of the LGBTQ+ community.

Earlier this month sci-fi actress Krys Marshall came out as pansexual in a heartfelt Instagram post to mark Pride Month.

Bryant is the latest celebrity to come out during Pride Month. The actress is best known for her role as Josie Saltzman on the The Vampire Diaries spin-off.

The CW television series, Legacies, is a fantasy TV drama produced by The CW and has built an avid LGBTQ+ following.

THIS ACTUALLY HAPPENED LIKE ITS NOT A DRILL KAYLEE BRYANT IS QUEER pic.twitter.com/ptBI9Q7uQ1

Actors and activists have been celebrating this June paying forward their support to the LGBTQ+ community online.

Stars such as Charli XCX, a GAY TIMES allyship honouree, have publicly acknowledged Pride Month and showcased support for the queer community.

Taking to Twitter, the hyperpop star posted: “Happy pride everybody. without the lgbtq+ community my career would be non-existent and my existence wouldn’t be as enriched – so thank you from the bottom of my heart for inspiring me, supporting me and teaching me so much love you all.”

🏳️‍⚧️🏳️‍🌈💕 happy pride everybody 💕 without the lgbtq+ community my career would be non existent and my existence wouldn’t be as enriched – so thank you from the bottom of my heart for inspiring me, supporting me and teaching me so much 🏳️‍⚧️🏳️‍🌈💕 love you all 💕

“I want to take a moment to thank the courageous activists, advocates and allies for their dedication to fighting against discrimination and hatred,” Swift said in a social media post.

“And as always, today I’m sending my respect and love to those bravely living out their truth, even when the world we live in still makes that hard to do.

“Who you love and how you identify shouldn’t put you in danger, leave you vulnerable or hold you back in life.”