Leave to Remain an intelligent and unique new musical – review 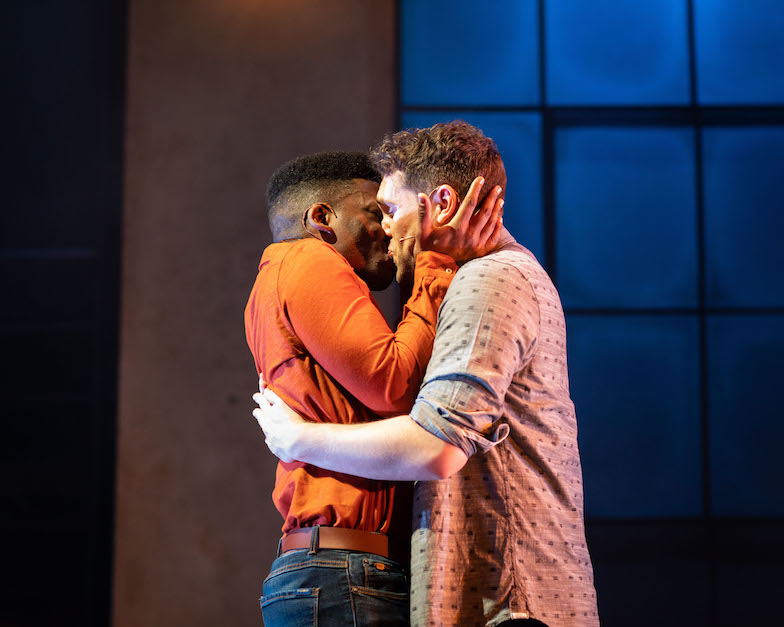 While the title may suggest otherwise, Leave to Remain has – thankfully – absolutely nothing to do with Brexit. It focuses on the lives of Obi and Alex, a young gay couple living in a trendy Shoreditch warehouse conversion. Alex’s firm is relocating to the UAE, and with his visa tied to his job, he floats the idea that marriage – and subsequently being granted leave to remain – is a possible solution. However, the timing is less than ideal and it will mean both men confronting their families and their pasts.

It’s a smart production, with the story seamlessly shifting into the impressively-choreographed musical numbers and back again. While some of the scenes lend themselves naturally to movement – such as the nightclub, which, if we’re honest, was probably featured a bit too much – others, including a taxi journey home and a dinner party with the in-laws, used simple but effective choreographed touches while key lines were being delivered.

There’s a lot here to recommend. The cast is impressive, each an accomplished actor and singer; we really bought into Tyrone Huntley and Billy Cullum as the leading couple, although the characters that stayed with us were their respective mothers. Alex’s overbearing all-American mom Diane (Johanne Murdock) and Obi’s caring and patient mother Grace (Rakie Ayola) both turned in believable and memorable performances. All the characters were gifted humorous and smart lines courtesy of Matt Jones’ witty script.

It achieves a lot in under two hours. This is a play which isn’t afraid to tackle a number of difficult issues – with conservative and progressive attitudes to the LGBTQ community, alongside religion, race, mental health and drug addiction all being explored from a variety of perspectives. It’s a lot to take in during a relatively short time frame, but each topic is handled sensitively and intelligently.

Indeed there isn’t much to fault. We thought there was a slight pacing issue – it’s nearly two hours without a break, which is a long slog – we felt the dinner party scene could have functioned as a satisfying conclusion prior to an interval. Alternatively, one or two of the lengthy nightclub scenes could have been trimmed to make a more enjoyable straight-through experience. We also weren’t really sold on the presence of a guitarist on stage the whole time – while it wasn’t distracting, it didn’t add much to proceedings, either.

These are, of course, minor issues with what is otherwise an impressive piece of theatre. Leave to Remain is a compelling, intelligent and unique new musical – absolutely worth checking out.