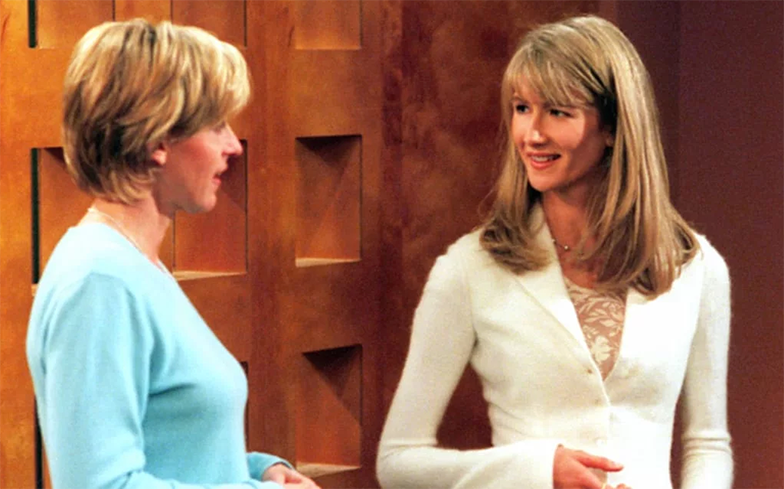 “We all spent the next couple of years really struggling in work and safety.”

Laura Dern didn’t find work for a year after her stint on Ellen’s self-titled sitcom.

The American actress made a special guest appearance in The Puppy Episode from the show’s fourth season, a two-part episode in which Ellen comes to the realisation that she’s a lesbian and comes out to her friends.

Although it was a massive success in the ratings (42 million viewers), the series was cancelled shortly after for being “too gay” and Ellen received multiple death threats after it aired. Dern, who played her love interest Susan, also suffered.

In a recent interview with Vulture, Dern reminisced about her time on the series and said it was the “greatest thing” she could’ve ever been a part of. “I was excited. I didn’t think twice about it. It was a great opportunity,” she admitted.

“And then the calls started coming in once I’d said yes, from a couple of advisers in Hollywood who were out gay men, [telling me] to not do it. A lot of people in my life really worried. And I was like, “This is ridiculous.”

“This is where I grew up in a bubble and didn’t realize we weren’t there yet or something.”

Dern wasn’t aware of the homophobia and backlash until “a flood of cops swarmed the set and the stage while we were rehearsing” due to a bomb threat. She and fellow guest star Oprah were forced to evacuate the building.

“It was the only time I ever experienced having to have to have full security detail,” she added.

Even though Dern had just appeared in the most financially successful film at the time, Jurassic Park, she “spent the next couple of years really struggling in work and safety” which was “radical to experience”.

However, Dern did add of the episode: “It’s shaped and continues to shape who I am as an advocate, as an activist, as a parent.

“It’s a profound thing when you see someone bring their truth, but also all the layers of shame and fear that have been put onto you because of feeling like the other, whatever your experience is. So I’m forever grateful.”

Both stars won in the end. Ellen launched her critically-acclaimed daytime talk show and has been awarded with 30 Emmys, 20 People’s Choice Awards (the most of any entertainer ever), and has hosted the Oscars, Grammys and Emmys.