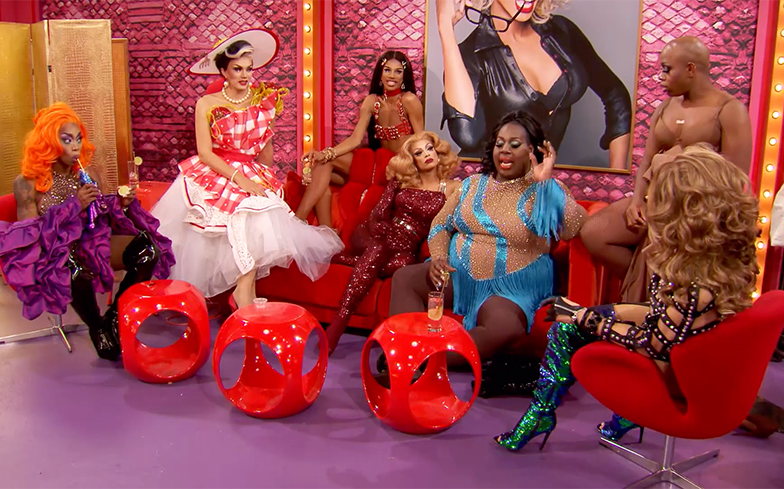 “I got revenge, I got redemption and this time around, ain’t no child’s play.”

The first 12 minutes of the next episode of Drag Race All Stars 4 has been released, and honey, Latrice is back with a vengeance.

After the events of last week’s episode, which saw Latrice earn her way back into the competition after battling Monique in a lip-sync showdown, the queens return to the werk room to spill some T.

“Baby, it feels amazing to be back,” says Latrice. “Even though Ru saved Monique, my point was made. I got revenge, I got redemption and this time around, ain’t no child’s play. I came here to step my pussy up, and I want my crown.”

In her snake-rattled confessional, Monique states: “So… Latrice is back. I guess she got her redemption moment… cute.”

Latrice then tells the queens that she’s ready to put her all into every challenge, but is then interrupted by Valentina who (again) calls out Manila Luzon and Monét X Change for choosing to eliminate her in the roast challenge.

“Sending me home doesn’t make sense with my fantasy,” Valentina admits. “I am now at a point where people don’t want me here. Two lipsticks were mine. I’m angry at the situation. I’m still fighting though, I’m not giving up.”

Shortly after, RuPaul reveals that for the next challenge, the All Stars are tasked with designing and hosting their own VIP Club nights, with extra special guest stars Susanna Bartsch and Rita Ora.

Because Latrice won her way back into the competition, she pairs the queens together. Watch the preview below.

The seventh episode of All Stars 4 premieres tonight on VH1 and Comedy Central in the UK.

Check out their promo shots here.

The highly-anticipated season is expected to premiere 22 January, one week after the finale of All Stars 4.

Watch the gag-worthy trailer for season 11 below.