Last week’s Strictly gave us a glimmer of hope for the future, this week a chaotic Lindy hop-a-thon 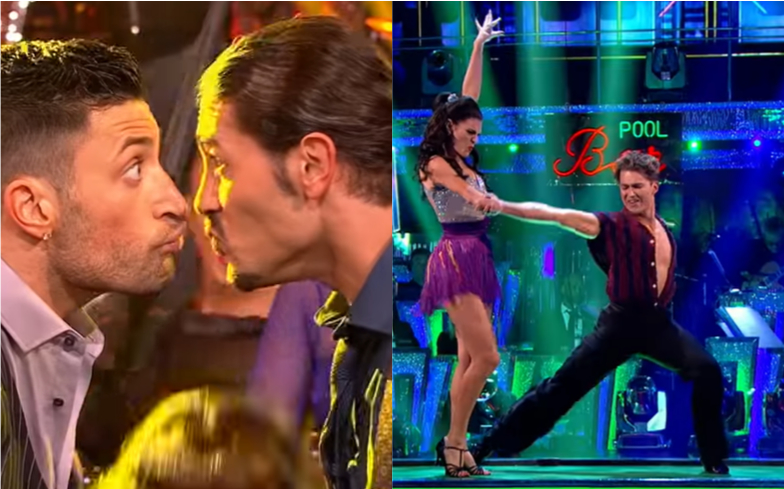 “If you’re watching at home, have a drink!”

Last week on Strictly showed that once again Blackpool is a treat. The dances were sublime, mostly, and the party atmosphere carried through the whole show. But just before we left there was just one more surprise.

During the pro routine, the series experimented with same-sex couples yet again, this time pairing the Italian pros Giovanni and Graziano together. Yes, the story of the dance had them pursuing the same girl, but during the parts where they danced together, much like the first number of the series, they completely stole the show. It’s just a shame the end of the routine had a cop out, faux shock at a nearly kiss.

And unlike other episodes after a special, this week the party atmosphere remained. Whether it was Bruno getting large camp feathers from Ashley Roberts, or nearly falling off his chair again, everything ran smoothly. Okay, that’s a lie, but we’ll get onto that complete meltdown in a moment.

Blackpool, however, proved to be the end of the road for Kate Silverton. It’s a shame, because at times she dances better than some of the other couples remaining in the competition, and yet Blackpool is pretty much where I imagined she would be exiting the competition. And although I’ve disagreed with the judges on previous weeks over who was sent home, I think Graeme did deserve to stay in last week. I may have hated his routine on the night, but something felt like it had clicked during the dance-off.

Actual footage of the results of the lindyhop-a-thon: #strictly #strictly2018 pic.twitter.com/fujSOC4zQj

And Graeme is exactly where this week starts off, although with another performance that shows why he deserves to be in the dance off. His posture seemed to be off, and there was no denying that as the routine neared its end he did stumble. But what’s more concerning is that for the second week in a row, Craig’s comments didn’t seem to match the mark that Graeme got. I expected the others to give him a six, but not Craig.

But Ashley Roberts immediately stole the show. The campness at the start with the feathers was one of the best aspects of the whole routine, and she worked every part of her body. Although I’d associate their song more with a salsa, her moves fitted the routine, and seeing as the samba is one of Strictly’s hardest routines, it wasn’t a shock to see their score drop.

But with Ashley having a drop in scores, Faye Tozer seized the opportunity and delivered an enchanting performance. Despite having to swap from the American smooth to this routine early in the week, it did not show as she delivered the dance effortlessly. Faye is definitely on track to get a perfect score at some point, and I feel this routine should have been it.

Shirley trying to read scores like a mum trying to order everyone's takeaway over the Phone. #Strictly

And then we came to what might be the last couple’s choice of the series, and honesty it was a bit disappointing. Joe Sugg is such a great mover, and yet a lot of the early part of the routine was just prop work. When it got halfway through and to the towel section, I started feeling the routine, but ultimately much like last week, I feel like he’s done better in the past.

Charles Venn was a funny one this week. I felt the drama and the determination from his tango, and for the most part I enjoyed watching him, but his posture just seemed to be a little off. And because of this the whole routine felt like it lacked something. And as much as a I like Lauren Steadman, her salsa was missing the energy. It felt a lot like her cha-cha-cha from Week 3, and I hated that dance. But although she wasn’t moving as well as I wanted her to, I think being marked lower than Graeme was a mistake.

And with the first dances for the couples coming to an end, Stacey Dooley certainly knew how to close that part of the show. Much like Charles’s tango, she had the drama and determination written all over the dance, but unlike Charles she delivered in every other aspect that she needed to. The performance was powerful, driven and passionate, and as Craig Revel Horwood would say, “I loved it!”

Then, it was time for the main event of the night, the Lindy hop-a-thon. Much like previous years cha-cha-challenge or paso doble-a-thon, all couples took to the floor to dance. And much like other years, the dance went off without a hitch. No one hit into anyone, which is good, but considering how over the top the Lindy hop can be, it ultimately felt a little disappointing as I was expecting so much more.

BEAR WITH US. WE'VE NEVER DONE THIS BEFORE PEOPLE. 😂

But despite the dance going off without a hitch, the same cannot be said for the scores. Everything that went wrong went wrong. The tablet with the scores broke, couples were announced in the wrong order, professional partners got mixed up and everyone got confused as some thought that Graeme was in seventh instead of Lauren. The only way the whole event could have gone worse was if their piece of paper somehow burst into flames, and given everything I’m surprised that it didn’t. As Claudia wisely said, “If you’re watching at home, have a drink!”

When it came to voting, it was a toss up between Faye and Stacey. And as much as I low a great paso doble, much like last week I decided that it was Faye who deserved my vote. But you can see why both dances were incredible below.

It was obvious that Graeme was going to be in the dance off, but Ashley wasn’t that much of a surprise. Despite Lauren being a better candidate to be in the bottom two, the public has not taken to Ashley at all, and it’s obvious that she’s going to be the Alexandra Burke of last year in this point of the competition, so expect to see her again in the dance off next week.

But who danced the best in your eyes? Let us know by voting below.