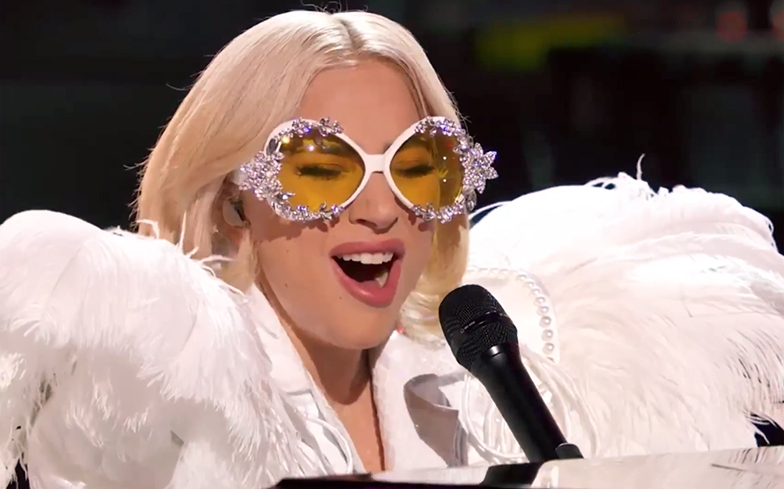 Lady Gaga proves once again that she’s one of the most talented pop stars of her generation.

A star-studded post-Grammys tribute concert to Elton John, which took place in January and celebrated the music icon’s illustrious career and back catalogue of music, will finally air on TV on 10 April.

A host of big names from pop performed his biggest hits, including Kesha, Sam Smith, Pink, Shawn Mendes and Miley Cyrus, but most exciting is a performance from Elton’s longtime friend and LGBTQ icon Lady Gaga.

Taking to the piano on stage at Madison Square Garden in New York, where the show was filmed, Gaga delivered a stunning rendition of one of Elton’s signature tracks – Your Song.

And while Gaga may have opted for a more stripped-back look for her recent country-inspired Joanne album era, she couldn’t perform an Elton John tribute without pulling out an over-the-top outfit and bedazzled sunglasses to match the legend himself.

“Sir Elton John is an international music legend who has captivated audiences across generations for more than five decades,” said Neil Portnow, President of the Recording Academy.

“His creativity, dynamic presence, and melodic virtuosity have positioned him as a cultural icon, and the Recording Academy is pleased to honour his immeasurable contributions to the music community.”

If you’re in the United States, you can catch the full performance on 10 April on CBS, but in the meantime watch a snippet of Gaga’s rendition of Your Song below.

The concert coincides with the release of two brand new albums from Elton, which sees a number of iconic singers cover some of his biggest tracks.

Revamp, which is due for release on 6 April, will also feature covers of Your Song by Lady Gaga, We All Fall In Love Sometimes by Coldplay, Daniel by Sam Smith, Tiny Dancer by Florence + The Machine and more.

Meanwhile, a second album called Restoration, which is also due out on the same day, will feature country-inspired takes on some of Elton’s biggest hits by the likes of Miley Cyrus, Miranda Lambert and Dolly Parton.

“It’s always a huge compliment when an artist loves your song enough to take the time and effort to rework it,” said Elton of the albums.

Revamp and Restoration are due out 6 April and are both available to pre-order now.