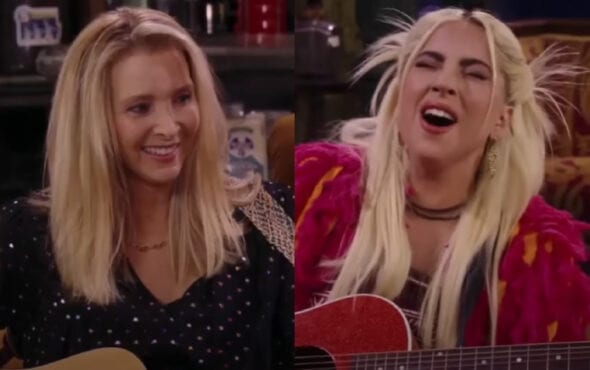 Lady Gaga has joined forces with Lisa Kudrow for a performance of the critically-acclaimed feline rights anthem Smelly Cat.

The track, which became the signature hit for Kudrow’s fan-favourite character Phoebe Buffay on Friends, made its comeback in the sitcom’s long-awaited reunion special.

In the clip, Gaga can be seen entering the iconic Central Perk café before asking Kudrow if she can sing alongside her for Smelly Cat. After stunning Kudrow with her rendition, a choir – which references the Captain Kool-directed blockbuster music video for the song – make a special guest appearance and provide backup vocals.

“Thank you, that was so great! I still think it’s better when it’s just me,” remarks Kudrow, before Gaga thanks the star and her portrayal of Buffay for “being the person for all of us on Friends that was – I don’t know if this is the right way to say – the different one, or the one that was really herself.”

Kudrow then praises Gaga for “carrying” that legacy along.

In an interview with Variety, Ben Winston – director and producer of the HBO Max special – revealed how the collaboration came to fruition: “I said to Lisa, ‘Would you be prepared to sing it?’ And she was like, ‘Yeah, that would be fun.

“We went through a few names, and we both agreed that Gaga, if we could get her, would be the ultimate one because she associates with and feels close to Phoebe in so many ways, as Gaga says on the show. That was a really beautiful moment. And Lady Gaga jumped at the chance to do it.”

You can watch Lady Gaga and Lisa Kudrow collaborate for Smelly Cat here or below.

Friends: The Reunion premieres 27 May on HBO Max.