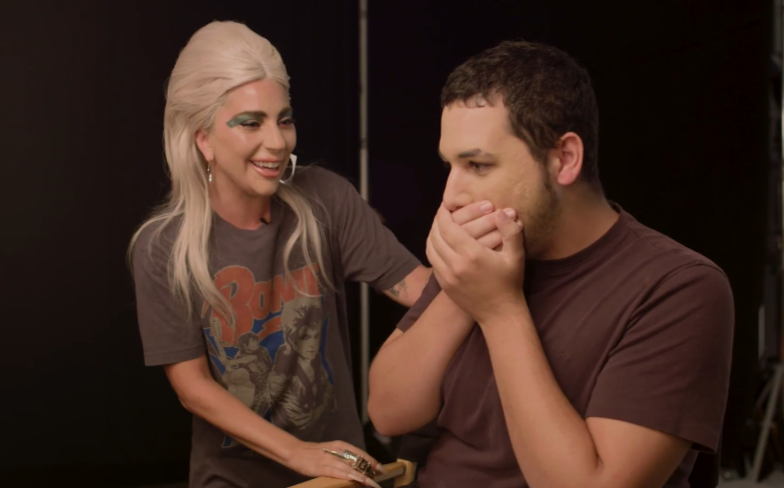 Brandon Galaz had no idea Lady Gaga was waiting in the wings.

Lady Gaga is a cultural icon, and has unashamedly embraced her LGBTQ fanbase, with many praising the inclusivity of her lyrics in her 2011 song Born This Way.

It was the lyrics of this song that helped 19-year-old cosmetology student Brandon Galaz come out as gay to his family. In a letter to Gaga, he explained that he always felt different, but didn’t have anyone to talk to about his sexual orientation. But when he heard the lyrics to Born This Way, it inspired him to come out to his family.

Allure magazine invited Brandon to Lady Gaga’s new make-up brand, Haus Laboratories, to have his make-up done by Gaga’s make-up artist, Sarah Tanno. However, what Brandon doesn’t know was that Lady Gaga was waiting in the wings to surprise him.

As he reads part of his letter to Tanno, Gaga approaches him from behind, and his reaction is incredibly heartwarming. You can watch the full 10-minute video on Allure’s website.

Brandon explains to Gaga how although his mother and sister accepted him, his father did not, and it drove a “wedge” between them. But he added that her lyrics gave him the “strength and permission” to accept himself.

After reading his emotional letter, Gaga praises Brandon telling him how “proud” she is of him, before applying some make-up to the student.

She adds: “It’s not how we look that makes us beautiful. It’s what we’ve been through and how we survive.”

An emotional Gaga later returns to continue praising Brandon, highlighting how he was able to be “vulnerable and honest” with her, and stating that moments like the letter is why Gaga does what she does.

“You’ve just changed a lot of people’s lives,” she told Brandon. “When they see this, they’ll be less afraid.”