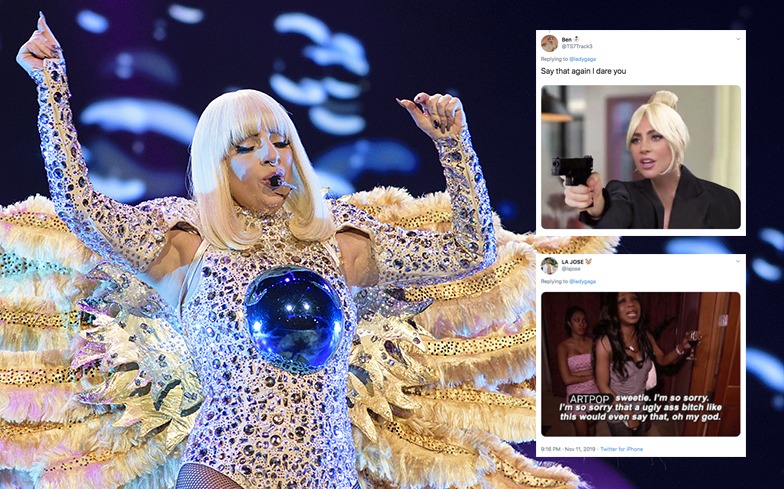 Little Monsters are not here for this ARTPOP slander.

Lady Gaga’s brilliant-yet-misunderstood album, which in retrospect was clearly too ahead of its time for most listeners to appreciate, was originally released six years ago and featured the incredible singles Applause, Do What U Want and G.U.Y.

So it’s understandable that Gaga may not look back too fondly on the album or the era surrounding it. Still, it maintains a special place in the hearts of a small but vocal (read: rabid) group of fans, and they weren’t too pleased to see their fave shade the record.

“I don’t remember ARTPOP,” she tweeted on Monday (11 November) night. And that simple tweet was enough to cause a frenzy.

The post currently has almost 200,000 likes and thousands of fans replying with confusion. Some have seen the funny side, others are disappointed with the throwaway comment about an album that clearly means a lot to them.

“Okay now listen here you troll. What we are not gonna do is joke about ARTPOP like that,” wrote one fan.

“Girl I literally have that tattooed on my arm you better start remembering,” wrote one fan who tweeted a photo of an ‘ARTPOP’ tattoo on their forearm.

Madeon, the French producer and DJ who worked on three ARTPOP songs – Venus, Mary Jane Holland and Gypsy – even got involved, tweeting: “Ohhhh you’re missing out, let me play it for you then, it has some GREAT moments!!”

See some of the best tweets about Gaga’s controversial statement below.

Shortly after ARTPOP came out in 2013, the singer teased on multiple occasions that a sequel to the album would be coming ‘soon’, although it’s been a good few years since she’s mentioned that idea.