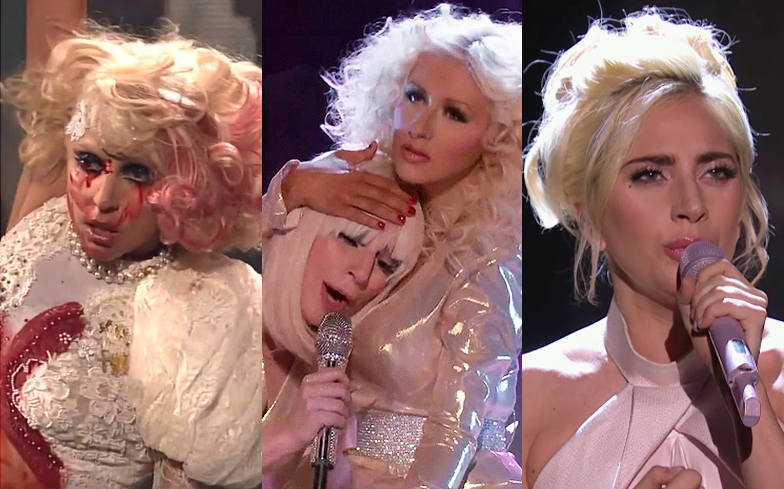 For nearly 10 years, Lady Gaga has delivered some of the most electrifying stage shows pop music has ever witnessed.

From her ambitious arena tours, to some truly memorable television moments, Mother Monster has built her reputation on bringing the unexpected, but backed with plenty of talent.

Lady Gaga set the standard for her show-stopping performances very early on in her career. Case in point is this blinder from American Idol in 2009. It starts with Mother Monster showing off her musicianship with a soulful, slowed-down version of Poker Face, before the beat kicks in and it quite literally pops off.

A manic violinist, fierce choreography and tassels that would make Cher proud, the beefed up version of Poker Face sounds like something out of an 80s action film, but packed a much harder punch.

Gaga cemented herself as a world-class performer with this shocking visual take on her hit single Paparazzi.

Taking on the media’s dangerous obsession with relentlessly hounding celebrities, the singer portrayed the downfall of her own fame – a bold move for anyone, let alone an artist just one year into her career.

If the tight choreography, flawless vocals and piano breakdown weren’t enough to grab the audience’s attention, the sight of Gaga bleeding on stage and eventually faking her own death certainly was.

Dressed in red and suspended high above the stage with a giant piano, this Lady Gaga performance truly did leave us speechless.

A towering figure for Her Majesty the Queen, the powerhouse vocals and golden musical punch gets us feeling a little emotional as she presents one of our favourite tracks from The Fame Monster.

Now, how do we get an outfit similar to this?!

Gaga showed off her versatility at the Brit Awards in 2010 with a medley of two of her biggest tracks from The Fame Monster.

As a tribute to her late friend and legendary designer Alexander McQueen, the pop star turned one of her most club-friendly bangers, Telephone, into a heartfelt ballad with lyrics re-written to express her sadness following his death.

But it wasn’t all sorrow, as she quickly transitioned into a techno-remix of fan favourite song Dance In The Dark, complete with a mind-boggling instrument – is it a guitar or a piano? – that played soundbites on request. Classic Gaga.

After years of supposed feuds, Lady Gaga laid her rumoured fallout with Christina Aguilera to rest in the most spectacular way possible.

If the shimmering 70s-inspired outfit for a performance of Do What U Want on The Voice wasn’t campy enough, Xtina’s massive hair and trademark ad-libs appearing behind a metallic clam shell took it to homosexual heaven.

Just try name an image more iconic that these two ladies embracing each other on a chaise lounges during this powerhouse performance.

We spent months waiting for the arrival of Gaga’s new album, and when it came it certainly didn’t disappoint.

Joanne features a country twang from the singer, and in her performance at of Million Reasons, it certainly showed us her talents.

Simple and involving just the lady herself and her people, even Prince Charles extends his hand to a round of applause for this rather moving Royal Variety Show performance.

When it came to delivering the biggest spectacle of her career so far, Lady Gaga didn’t disappoint. From singing God Bless America / This Land Is Your Land on top of the NRG Stadium in Houston as a moment of defiance against Trump, to jumping into the venue for a medley of her classic hits, Mother Monster reminded us all why she’s considered one of the very best.

Born This Way had new resonance following recent controversial bills trying to be passed, while a finale of Bad Romance was pure pop perfection.